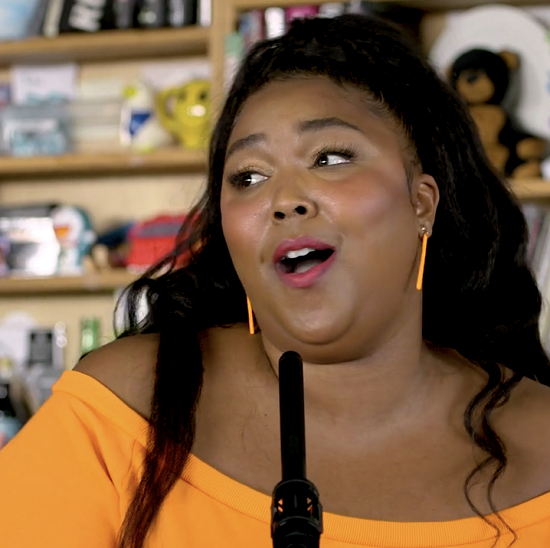 It's Lizzo's time to shine and you'd better believe the larger-than-life star is taking full advantage. Her breakthrough album Cuz I Love You is currently sitting pretty on the Billboard Charts while her hit single "Truth Hurts" reigns supreme in the top 5 of the Hot 100. The next stop for the singer/rapper's victory lap was the NPR offices, where she and her four-piece band put on a short show for the famed Tiny Desk Concert series.

Looking like a dream in a tangerine off-the-shoulder dress, Lizzo took the crowd to church with a heartfelt rendition of her album's title track "Cuz I Love You." While she was all emotion during the song, she was all about the jokes as well, remarking on just how tiny the titular tiny desk really is and conducting a profanity-laced sermon that led into a performance of "Truth Hurts." Her band was game, too, giving her music to ruminate to as she spoke with the crowd that had gathered to see her work her magic. For her third and final track of the day, she launched into a slightly more laid-back version of her jam "Juice." Though stripped back, Lizzo still kept it funky and even let her trusty flute Sasha get a bit of work in.

While performances for Tiny Desk are always great to watch, we have to admit that Lizzo's is perhaps one of the most fun ones we've ever seen. Here's hoping that she continues to get her shine on for years to come.