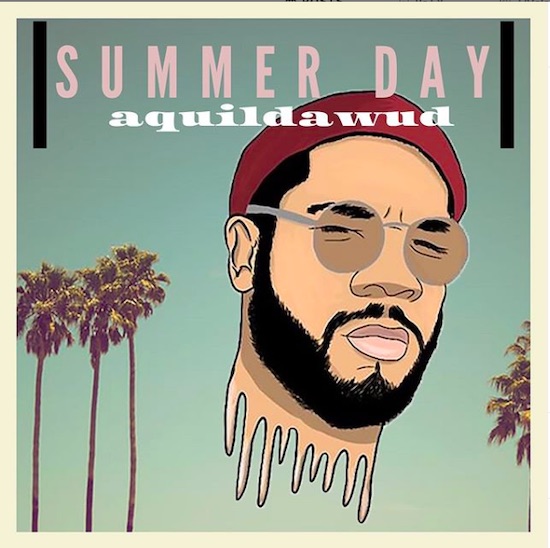 Back in 2003, the world was introduced to a husband and wife duo called Kindred the Family Soul with the release of their debut album, Surrender to Love. At the time, we were also introduced to their first-born son, Aquil, when he appeared on the cover for their single "Rhythm of Love." Fast forward to 2019 and their brood has grown and Aquil is all grown up and attending Morehouse College. However, the apple doesn't fall from the tree as is indicated by the release of his official debut single, "Summer Day," which premiered earlier this week.

Like his parents Aja and Fatin Dantzler before him, Aquil, now known as Aquildawud, also has love on the brain as shown in this dedication to his girlfriend. The acoustic guitar licks provide the backdrop for this sunny, midtempo groove, making it the perfect ode to summer love. "You make me feel all warm inside / And when you smile it gets too bright for my eyes," he sings sweetly. Whether you are in love or patiently waiting for it to come knocking at your door, it'll be hard to resist this sentimental reminder of the restorative power of finding the one.

Needless to say, Aquildawud has the full support of mom and dad, who both took to social media to express their pride about him following in their musical footsteps. "Pleased to announce #theCollegeJunior @aquildawud released his first tune to the world today...It's still a few days left of Summer and it's a banger," Fatin proudly expressed via Instagram. Mom was equally as excited, expressing her happiness with her son's output while admitting that it was a pleasant surprise. "Seems like we would have expected it but we didn't. Grinning still. Proud af," she boasted while recalling how he tagged along during their early days in the industry.

While the aspiring teacher has already expressed his desire to give back in the classroom, we have a feeling that this won't be the last we'll hear from this young man on the music front. In the meantime, kick back and let the soothing sounds of love wash over you as we wait to see what's next from this natural talent.