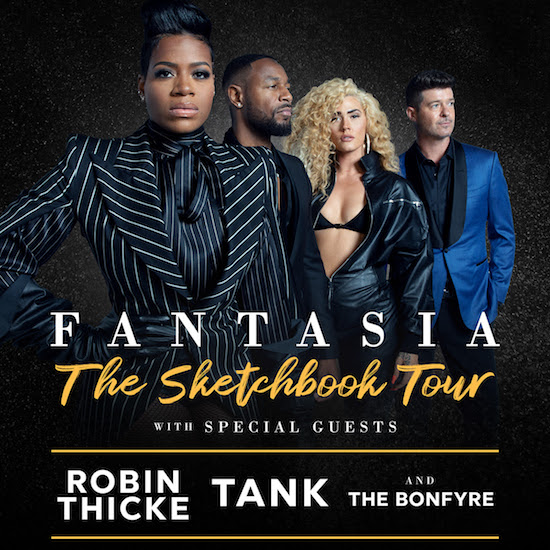 Megan Thee Stallion may have hip-hop on lock with Hot Girl Summer, but on the R&B and soul side of things, it's about to be Fantasia Fall with her announcement of The Sketchbook Tour to accompany the release of her upcoming seventh studio album Sketchbook this autumn. That news alone is major, but she's decided to sweeten the deal with the addition of special guests Robin Thicke, Tank and The Bonfyre who'll be joining her along the way.

The Sketchbook Tour is scheduled to take Fantasia and friends all across North America between October through December. The tour begins on October 17th in Columbia, South Carolina and will hit a number of major markets including Atlanta, St. Louis, Philadelphia, Baltimore, Chicago, New Orleans, Houston and Oakland before wrapping up in Los Angeles on December 6th. Altogether, Fantasia will grace stages in 29 cities on this tour with her special guests varying in each city.

Concertgoers can look forward to Tasia singing from her catalog of past hits and new music from Sketchbook, including the lead single "Enough" and her soon-to-be-released follow-up "PTSD" featuring T-Pain. Of course, she'll be bringing that fiery rock soul that she's known for to the stage, so get ready for a hell of a show, y'all. Tickets for Fantasia's The Sketchbook Tour go on sale on Friday, August 23rd. For more information and details on special VIP packages, be sure to visit her website.


TAGS:  fantasia, robin thicke, tank, The Bonfyre
Previous: Kevin Michael Is More Than Ready If You’re ‘Down’ Next: Mayer Hawthorne Channels ‘The Princess Bride’ To Put Us Up On ‘The Game’