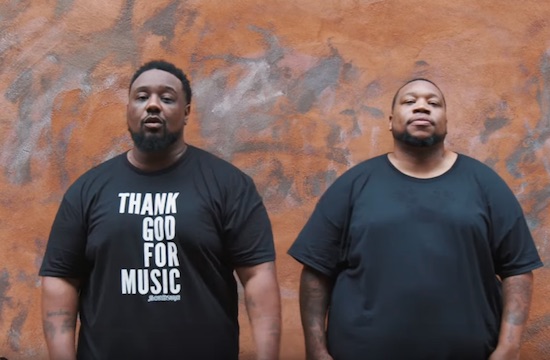 Little Brother has reunited and it feels so good to have Phonte and Rapper Big Pooh back together and making music again. Especially when they sound as good as they do on their comeback album May The Lord Watch. The 15-track collection is chockfull of the lyrical dexterity, neck-breaking beats, sharp wit and keen social criticism that LB is known for. Among the standouts on MTLW is the track "Black Magic (Make It Better)" featuring Madison McFerrin, which is the first song to get the visual treatment from the album.

Filmed on location at Durham, North Carolina's annual Black August In The Park celebration of black joy, black excellence and all-black everything, the setting is the perfect one for LB's message of black resilience in "Black Magic (Make It Better)." The video directed by N'Jamund Washington actually holds the distinction of being the first-ever that the group filmed in the city where they formed at North Carolina Central University in the late '90s.

In between scenes of real-life festival-goers getting their entire lives and shots of Madison singing in the sunshine, we see Tay and Big Pooh alternate spitting hot fire. They look as comfortable today as they did back in the day, flowing like the brothers in rhyme and rap vets they are but keeping it fresh and full of life. Phonte himself is fresh dressed in one of SoulBounce's Thank God For Music t-shirts throughout the video, making a subtle statement as it relates to the album title. Toward the end of the video, the fellas are seen posted up next to a huge display with their name. The screen goes black with only Little Brother lit up and the words "Thank God For Music" illuminated, bringing the message into clear focus.

Phonte and Rapper Big Pooh are quite focused on May The Lord Watch, picking up their mics right where they left them nine years ago. Released in the wee hours of Tuesday, August 20th when the Chick-fil-A versus Popeyes chicken sandwich wars raged on, the album quickly became the hot topic amongst discerning hip-hop heads and music lovers who patiently awaited their return to wax after their long hiatus, which for a while looked to be permanent. But after reuniting onstage at last year's Art Of Cool Festival with original group member 9th Wonder, a proper reunion was the natural progression. Although 9th Wonder declined to rejoin the group, May The Lord Watch showcases production from a variety of producers, such as Khrysis, Nottz, Focus... and Black Milk, who laced the project with banging beats and soulful samples. Also lending their talents to MTLW alongside Madison on the vocal side of things are singers including Carmen Rodgers, Carlitta Durand and Darien Brockington, who has also been missing in action and was refreshing to hear again.

LB handled their business on May The Lord Watch and delivered their strongest album since 2005's The Minstrel Show, coming full circle to their sophomore set. The Minstrel Show introduced listeners to the fictional black TV network UBN and the bawdy soul man Percy Miracles, hilariously played by Phonte. UBN and its current roster of ratchet reality TV programming play out in funny skits on MTLW, where we learn that Percy Miracles suffered an untimely death. At the very end of "Black Magic (Make It Better)," Little Brother pay homage to his memory in the video. Percy may be gone, but with May The Lord Watch, Little Brother proves that they are here to stay.