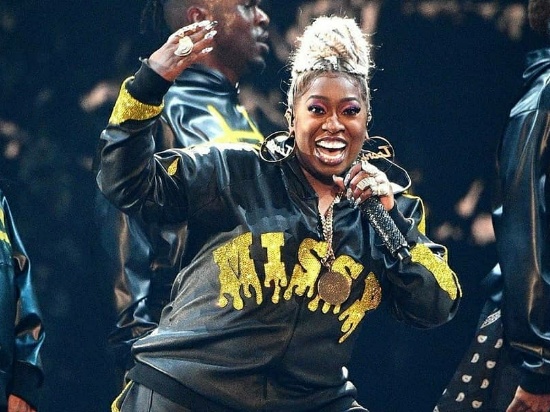 MTV's Video Music Awards are rarely Must See TV, but that wasn't the case last night. When it was announced that Missy Elliott would be the recipient of this year's Michael Jackson Video Vanguard Award, the 2019 VMAs got added to the calendar in pen not pencil. Whereas most VMAs are awful displays of subpar pop music drivel, MTV stepped it up this year with a diverse roster of artists we actually wanted to see perform led by the icon Missy Misdemeanor Elliott herself.

Leading up to Missy's performance, many of her peers and proteges shared words of love, praise and adoration in a video tribute. Timbaland, Ciara, Lil Kim, Lizzo and Janet Jackson all fawned over her and were even joined by regular degular people to all speak on Missy's undeniable talent, artistry, creativity and influence; her contributions to music and how she's changed their lives. After that brief segment, it was time for the main event, and Missy came out swinging.

Rocking a shimmery silver coat and overalls, platinum blonde braids styled in an updo and a gold medallion that read ICONIC, Missy arrived from the future and brought a few of her dancers with her to kick things off with her new joint "Throw It Back." The bass-heavy single from her new EP ICONOLOGY was the perfect track for the robot-like dancers to pop and drop it low to. And when she spit the lyrics, "I'ma snatch they wigs," their wigs in fact got snatched, leaving them bald but they didn't miss a choreographed step.

After breaking us off with that newness, it was time for Missy to travel back in time through her catalog of bangers. She went back to where it all started with "The Rain" and took her iconic black bubble suit out of storage. Thanks to some trippy graphics, she flew through the air over the audience before landing back on stage where another set of dancers with umbrella hats reenacted the choreo from the original video. From there, Missy and her dance company went off with multiple costume changes and dance routines as the musical medley continued with "Hot Boys," "Get Us Freak On" and "Work It," which began with a surprise appearance by dancer Alyson Stoner who was the young girl featured in the original video. "Pass That Dutch" came next with Missy reliving being a scarecrow atop bales of hay before the big finish with a massive performance of "Lose Control" to shut down this epic performance befitting of a living legend.

The production was a feast for the senses and multiple viewings are necessary to see everything happening all over the stage. After the incredible showcase, Cardi B presented the Michael Jackson Video Vanguard Award to Missy who she accepted the award with a humility and grace that belied how she just snatched everyone's wigs.