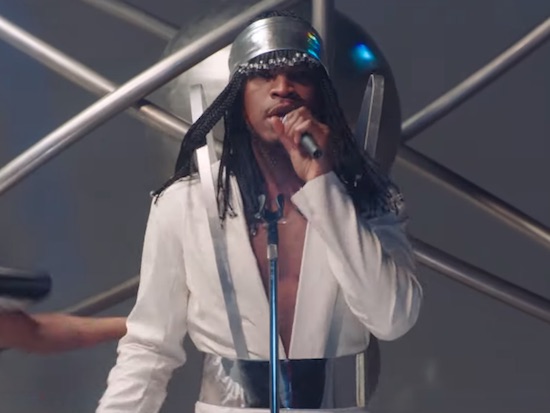 Sherman's Showcase has quickly become our guilty pleasure around SBHQ. IFC's new sketch comedy series is quite amusing, but it's the music that really tickles our funny bone. That's thanks in large part to Phonte and Zo! who put in work on the weekly soundtrack of silliness. They're not the only ones contributing music to the series, but their productions are routinely the standouts. Who can forget the Negro spiritual "Drop It Low (For Jesus)" from the premiere, or "Vicki Is The Water Warm Enough" drenched in the purple waters of Lake Minnetonka from episode three? Another favorite is the song "Time Loop" as performed by the fictional group Galaxia, which is really all Ne-Yo. "Time Loop" is a catchy bop, and now fans of the song get to watch more Sherman's Showcase shenanigans in its official music video.

In the "Time Loop" video, clips of Galaxia/Ne-Yo on the "original" Sherman's Showcase TV show are cut into footage from a low-budget sci-fi film, DARK.XENON, that the show's host/creator Sherman McDaniels made back in 1982. The end result is a hilarious mashup of scenes of a crew on a spaceship with Sherman's Showcase clips. Hilarity abounds, especially when Galaxia/Ne-Yo goes off on a lyrical tangent about quantum physics in "Time Loop" and the spaceship crew encounters some intergalactic danger. All this plays out in five minutes of foolishness.

For even more musical madness, look no further than the Sherman's Showcase Official Soundtrack, which dropped last Friday. On it, you can hear cuts from the first few episodes as well as tracks that will be featured on upcoming episodes, such as the crankin' go-go jam "The Black Kids At The White School" featuring Phonte and the outrageous Anita Baker sendup "My Fantasy." After you watch "Time Loop," get into the soundtrack and cross your fingers that Sherman's Showcase gets picked up for another season on IFC so that we can get more comedy where this came from.