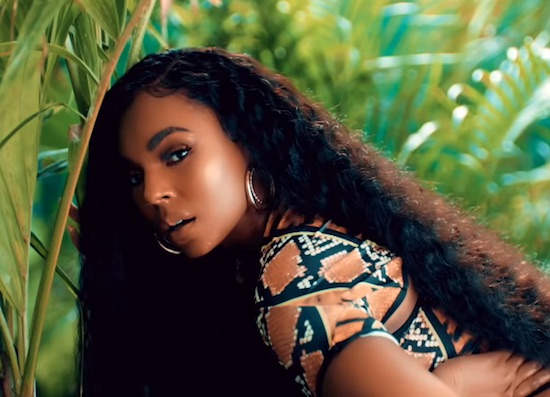 Afrobeats has slowly but surely been taking over the airwaves, with everyone from Jidenna to Beyoncé putting their own twist on the music from the motherland. Now Ashanti is riding the wave with her latest treat, “Pretty Little Thing” featuring UK artist Afro B. But, more than just a song, the track is part of a collaboration with women’s clothing retailer PrettyLittleThing, for a scandalous collection of barely-there bikinis and cover-ups that are suited "for the fierce females to run the urban jungle in" and “clash dangerously in predatory prints for maximum mileage.”

For the song, “Pretty Little Thing” rides a mid-tempo Afro-Caribbean groove that finds Ashanti reminiscing on a love divine. “Whenever it comes to you, memories open wide / Cos' every thought of you, playing inside my mind / It's so vivid that the way that I see it,” she sweetly sings. Meanwhile, Afro B promises to be her “Django.” We’re not sure if he’s referring to the film or if that's his way of saying he's off the chain, but it flows well with the rest of the bouncy, feel-good production.

Ashanti couldn’t give us a jam like this without delivering a video to show off her pretty little assets to match. The visual for the song features Ashanti showing off and showing out at an exotic Caribbean locale. Jamaica? Turks & Caicos? Trinidad? It doesn’t matter. It’s all a backdrop for Ashanti’s bodacious body and enticing ensembles. The clip is somewhat reminiscent of her “Rock With You,” video, but with more curves, less clothes and better choreography.

“Pretty Little Thing” is the latest track to come from Ashanti who's clearly been putting in work in the studio. Earlier this year she released “Say Less” with Ty Dolla $ign and most recently she dropped "The Road" with Soca superstar Machel Montano. With all these collabs, maybe she's working on a duets album? Whatever the case, we are here for it and happy to see Ashanti remaining relevant.