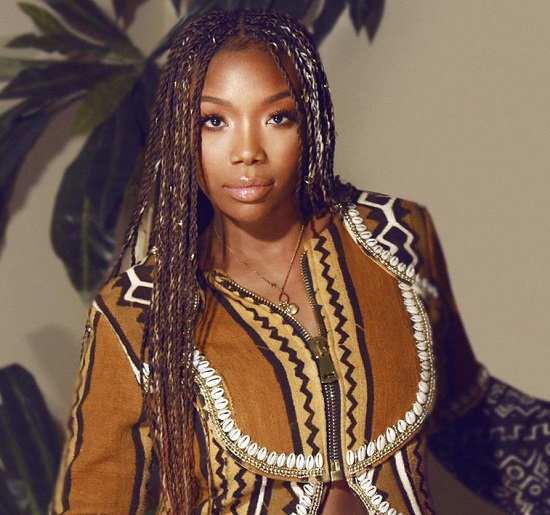 Sooooo...we may have jumped the gun a bit in proclaiming that Brandy's new album would be called Freedom Rings. But can you blame us? Like many a Brandy stan, we're anxious to hear what Brandy has in store for her upcoming album (which she affectionately calls "Be7"...for now) and can't wait to welcome the star back into her much-deserved spotlight. We get to do just that, though, as it turns out that "Freedom Rings" is actually the name of her new single — which the singer dropped in the wee hours of this morning.

Like her last official release "Beggin & Pleadin," Brandy's taking a more soulful approach than her earlier fare. The track starts with bluesy guitar riffs and a foot-stomping groove as Brandy makes her own declaration of independence. "I gave you all I had  — my love, my blood, my sweat and my time / But you wanted more / I invested these years, these tears that I cried / Concrete but I rose like a rose / Lord knows I almost died," she sings with determined conviction on the chorus. "They tried to change me, chain me... / A runaway declaring my freedom rings." While she's free from the constraints put on her throughout her career, the singer isn't forgetting about the past that got her to this point. She name-checks late producer LaShawn "Big Shiz" Daniels, who helped write many of her biggest hits and who sadly passed earlier this month, letting the world know that "in me LaShawn will shine again." She's also using the moment to celebrate the 25th anniversary of her debut album Brandy, which arrived on this very day in 1994.

Along with the new song, she's also giving us a behind-the-scenes video of the song's creation. She lets us in on the recording process alongside songwriter and producer Sebastian Kole and lets us know exactly what the song (and new project) means to her. "I lived 'Freedom Rings.' I lived every word in this song," she says at one point in the video before staking claim in her truth and sharing optimism about what the future holds. Looks like #Be7 is going to be one for the books.

Do you guys feel that? That's just Brandy preparing to snatch a few wigs.