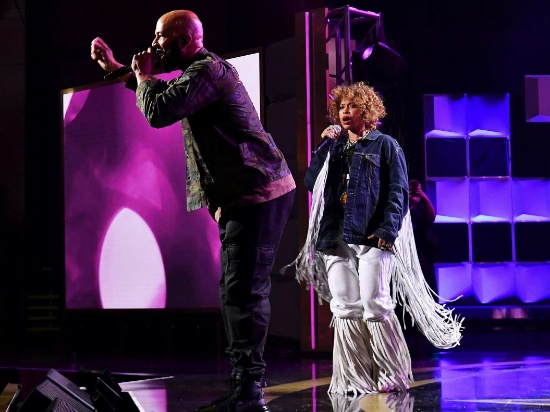 Black Girls Rock! is all about celebrating Black girls, women and our magic, but there's always room for Black men to join in the festivities. This year, Common got the call to do just that, and he enlisted gospel artist William Murphy and his former flame Erykah Badu to assist him in closing out Black Girls Rock! 2019 with a spirited medley.

William Murphy actually kicked things off, singing the chorus of "God Is Love," the last track on Com's new album Let Love, taking over for featured artists Leon Bridges and Jonathan McReynolds. Murphy and three background vocalists had it sounding like church up in there and set the stage for Common to spit his bars. Two minutes in, the music smoothly segued into Com's classic "The Light," and he brought out none other than his ex Erykah to perform it with him. Released in 2000 on the album Like Water For Chocolate, the song was a love letter to Badu during their infamous relationship. She strutted out rocking a short, curly hairdo and baggy, fringed outfit to sing the Bobby Caldwell hook. Erykah and Common looked very happy to be performing with each other again, and it felt like old times. They kept the throwback party going with Erykah taking the lead on their duet "Love Of My Life." The cherry on top of their reunion was a freestyle by Com at the end and seeing Badu hype him up.

It's been over 15 years since these two dated, but they still had mad chemistry on the Black Girls Rock! 2019 stage. We know that Common and Angela Rye have rekindled their romance in recent months, but Common and Erykah Badu may just have some unfinished business together. Like most soul mates.