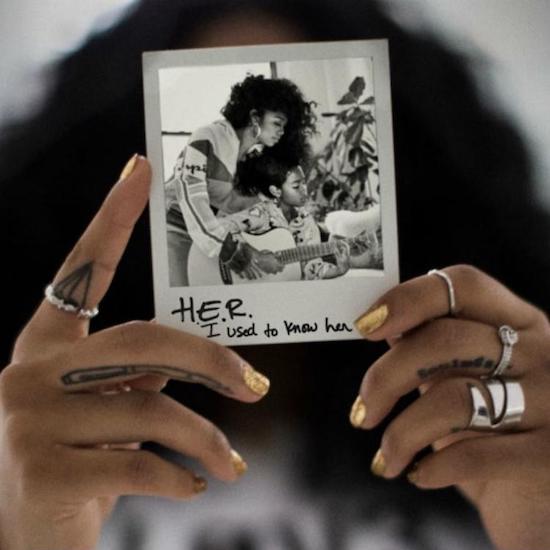 H.E.R. brings things into focus on her surprise album release, I Used To Know Her. Like her 2017 album, H.E.R., the project is yet another full-length compilation composed of previously released EPs, this time combining I Used To Know Her: The Prelude and I Used To Know Her: Part 2. It's more than just a rerelease, though. On I Used To Know Her, she's added a few new songs, extended some interludes into full-length tracks and switched up the track order a bit to better fuse the projects into a cohesive whole. For the cover art, the previously blurry Polaroid photo is now clear, as we see H.E.R. in present-day leaning over her younger self to teach the child how to play guitar.

The elusive chanteuse gives us something old and something new on the full-length project, borrowing elements from other songs, like on the track “Something Keeps Pulling Me Back,” to express her blues. Other brand new tracks include “Uninvited (Live),” along with the previously released “Racks” featuring YBN Cordae and “21.” For those of us complaining about interludes not being full songs, she’s given us longer versions of “Going” and “Be On My Way.” She also includes the 2019 BET Awards version of the “Lord Is Coming,” once again featuring YBN Cordae. (Conspicuously missing, however, is the new song “Anti,” which she just premiered at the 2019 MTV Video Music Awards days before dropping this album.)

The extended tracks on I Used To Know Her are the back-to-back songs “Going” and “Be On My Way.” The bass-heavy, guitar-led "Going" is just as sweet as the first time we heard it. “Be On My Way,” originally the opening salvo to the Bryson Tiller-featured single “Could’ve Been,” also stands triumphantly on its own. The haunting digitized harmonies serve as a great backdrop for H.E.R. to ghost on a man who really ain’t even hers. The tracks complement each other with similar themes. While there aren’t any new lyrics added to either, the instrumentation and arrangements are enough to help them push through.

New to the party is “Something Keeps Pulling Me Back.” H.E.R. flips Chingy and Tyrese’s 2006 hit into an airy ballad about a relationship on the rocks. She shares her break-up-to-make-up moments over laid-back piano keys and frenetic drumming in the background, almost mimicking the anxiety of her situation. That’s followed up by the “21,” a Lauryn Hill-esque track that details the young artist’s glow up. Even though she’s working to rise to the top, she’s still down to earth as she proves on the other previously-released new song “Racks,” an immaterial girl power anthem about wanting someone that will hold you down between money and diamonds. Both are welcome additions to this collection.

She continues rolling out new songs with “Good To Me” and “Uninvited (Live).” “Good To Me” is a guitar-led groove that finds H.E.R. laying down the rules for being her boo thang. The track ends with a little behind the scenes of her writing process. Meanwhile, “Uninvited (Live)” is a sweeping ballad about no longer feeling welcome by your lover. The fact that the track is a live recording plays to the idea of wanting to make or re-establish a connection. Lastly, there’s the soaring “Lord is Coming,” which sparks the same feels and chills we got when we heard it at the BET Awards earlier this year.

While we wait for her official debut album, H.E.R. keeps us fed and satisfied with I Used To Know Her – for the time being at least. Will she keep releasing EPs then later compile them into albums? We don't know if she'll keep up with that format now that we're on to her, but maybe that's her thing. She’s also keeping us guessing by not including “Anti” on this album. But, hey, that's H.E.R.! Just when we think she’s run out of tricks, she pulls another stunt, keeping some mystery in the relationship between her and her fans. One thing that we don't have to wonder about is the next-level quality of H.E.R.'s music, which is the most consistent thing of all.