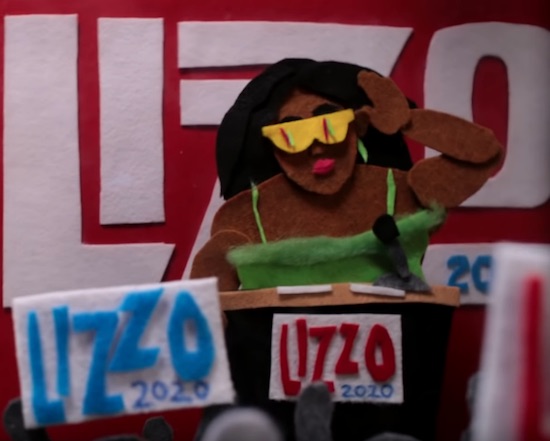 Lizzo’s No. 1 hit “Truth Hurts” got a little traction and notoriety when it was released two years ago. But, a grassroots movement for the singer and few lucky (or calculated) coincidences – such as appearing on social media app Tik Tok and being in the Netflix film Someone Great – helped the little single and singer that could reach new heights. Taking full advantage of her moment at the top of the charts, Lizzo has decided to release a lyric video that brings the song to life in adorable animation.

You may have seen the tweets between Lizzo and the former Secretary of State Hillary Clinton, where Clinton quoted part of song's opening lyrics (“I just took a DNA test, turns out…”). Apparently, Lizzo, who was awed and flabbergasted by the politician's response that she was also inspired to run for president herself – or at least in this felt fabric stop motion animated video. Like the pied piper of positivity that she is, Lizzo sings, twerks, plays her flute, collecting hearts and votes on the campaign trail. She also pays homage to former President Bill Clinton’s appearance on the Arsenio Hall Show when he played the saxophone.

With the drop of this super cute lyric video, it looks like "Truth Hurts" and Lizzo's reign won't end anytime soon. Not that we'd want it to. Click play below and let us know what you think of Lizzo’s crafty new clip.