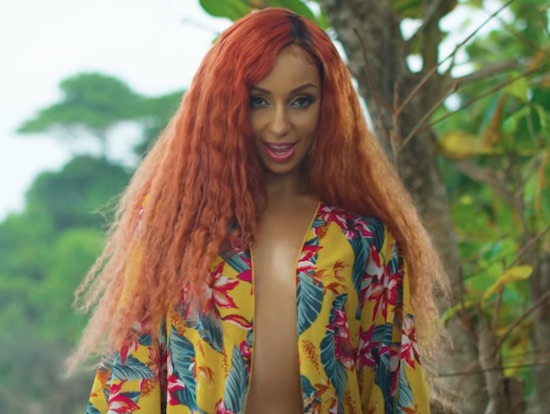 Mya may have just finished making her way around the Caribbean on season one of VH1's reality show Girls Cruise starring Lil Kim, Chilli and a few other personalities, but her tropical travels weren't done. The ageless beauty takes us to the gorgeous island of Jamaica in the music video for her song "Handsfree," a dancehall duet alongside reggae artist and dancer Ding Dong.

"Handsfree" incorporates the popular "Sexting Riddim" produced by Jonny Blaze, Stadic and DJ Perf, who released a compilation of tracks using the riddim earlier this summer. Mya and Ding Dong's contribution to the compilation is a flirty little ditty that starts with the songstress yearning for her man to handle her with no hands and "wine up yuh body on me" on the chorus. He's got that wining skill that she loves, needs and wants, and Ding Dong is more than happy to satisfy her desire on his verses.

For the video directed by Cinema Gods JA, the beautiful island setting sets a serene scene for Mya to relax, relate and release. When she's not doing yoga in pum pum shorts, she chills and sings on her balcony overlooking the beach. Miss Mya is wearing a long red-orange wig and a floral robe open just enough to show her bare chest without revealing her goodies. (Double-stick tape for the win!) Minus the wig that is doing her no favors, she is the picture of perfection and giving us serious body goals so we can be ready for Hot Girl Summer 2020. She links up with a couple of girlfriends to frolic and have fun on the beach before she hooks up with Ding Dong at a hot and sweaty club later that night where they both talk their ish.

Mya is no stranger to dancehall, having famously collaborated with Beenie Man on his hit "Girls Dem Sugar" back in 2000. "Handsfree" is a good reminder not only of Mya's versatility but that she's still got it because she never lost it. Catch a vibe a wine up on somebody's body with "Handsfree" to set the mood.