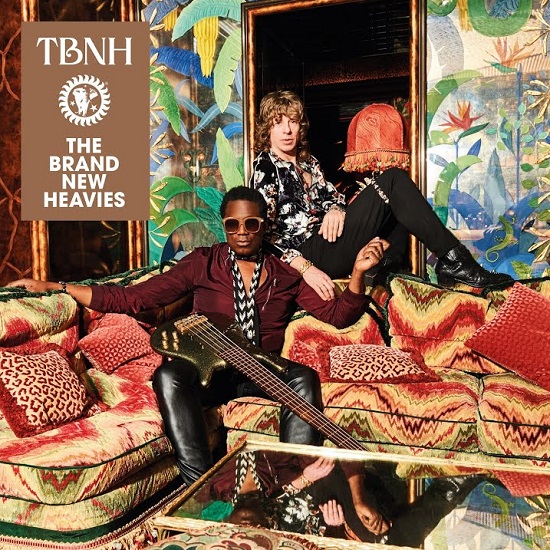 Can you believe that The Brand New Heavies have been funkin' us right on up for nearly four decades? Well, you'd better believe it. The acid jazz pioneers first formed in the mid-'80s and have been a musical staple ever since. The years have brought on a number of personnel changes, but the duo of Simon Bartholomew and Andrew Levy have kept the flame burning throughout and continue to do so with the band's newest effort TBNH.

TBNH aims to evoke the feel of the Heavies' classic material, and it does so by reuniting the group with some of its best-known vocalists as well as inviting talented newcomers to the fold. N'Dea Davenport returns to provide the set's two singles — "Getaway" and their cover of "These Walls" — both of which remind of the group's early '90s heyday. Speaking of the '90s, Siedah Garrett also stops through, dropping off solid jams "Just Believe In You" and "It's My Destiny" while reminding us of the magic they created on the Heavies' 1997 album Shelter. Angie Stone ("Together") and Honey LaRochelle ("Heat") also join in with solid contributions. Meanwhile, Jack Knight ("Little Dancer") and Laville ("Dontcha Wanna") give us the rare treat of hearing a male vocalist over the group's tightly packed grooves and inventive arrangements.

Elsewhere, the band's touring singer Angela Ricci gets plenty of chances to shine. She holds her own against the band's stacked arrangements on tracks like opener "Beautiful" and the disco-influenced ballad "Get On The Right Side." And, of course, there's Bartholomew and Levy themselves, whose playing and musical choices are continuously superb throughout.

Everything offered here isn't a winner and the old-school feel of things surely won't get the band any cool points with a generation that barely remembers CDs. But, if nothing else, TBNH proves that The Brand New Heavies still have the magic that caught the ears of listeners way back when. It's that spark of magic that remains their greatest asset and will keep fans coming back.