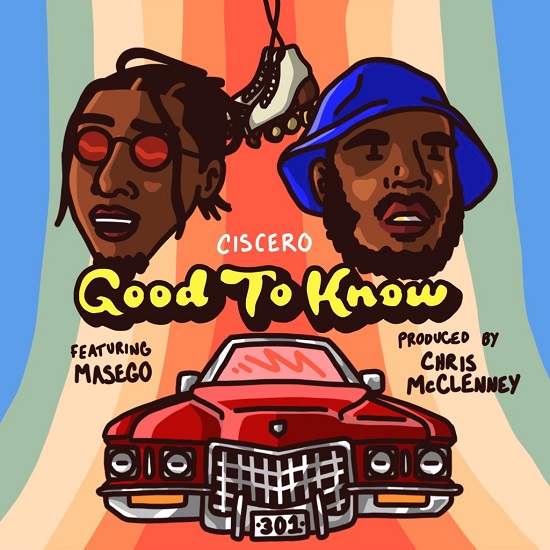 We first met DMV rapper Ciscero as a guest on GoldLink's jam "Fall In Love." Though that was way back in 2016, we've been jamming to him ever since. He's been quite selective about what he's dropped since, though what he's given us — including jams like "Function" and "GOOD" — have been the business. He's keeping that streak up with the release of his latest single "Good To Know."

"Good To Know" finds Ciscero connecting with his homie Masego over a Chris McClenney production to make some hip-hop magic. Chris laced the fellas with a laid-back beat full of synth chords and a warm, throbbing bass that's great for chilling out. The two match the production's energy, giving us a smooth cut about cutting off those who aren't really down for you in the way you need. "You don't really rock with me / That's good to know," the rapper sings on the chorus along with songstresses Ambriia and Kp, who provide a certain feminine energy that really makes this song sing. Meanwhile, he and Masego deliver verses filled with sing-song rhymes about their come up as they call out the rats that have come around since they got a little bit of cheddar for themselves. However, with a groove that feels this good, it's hard to even worry about something as small as folks trying to cling on to your success.

We've been waiting on Ciscero to deliver his Devil's Pie EP for a while now. Though that still hasn't materialized — and, at this point, probably won't — maybe "Good To Know" symbolizes that something bigger from the rapper will soon come. We suggest you follow him on Twitter if you want to stay posted for what he's got next.