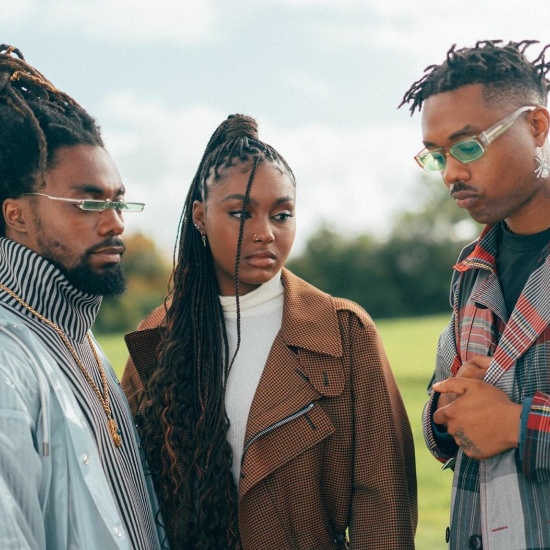 EARTHGANG – the South’s next great dynamic duo – might be known as a hip-hop group, but they also know how to smooth things out on the R&B tip. Likened to a version of OutKast with two Andre 3000s, members Olu (aka Johnny Venus) and WowGr8 (aka Doctur Dot) have teamed up with singer Tiana Major9 for the song “Collide” taken from the soundtrack to the upcoming feature film Queen & Slim.

“Collide” is a simmering duet about two lovers who are as different as night and day, but they find that there’s something special between them. “Everybody's got opinions on our thing,” laments EARTHGANG’s Olu, while in the same breath saying, “Ooh, don’t let me wake up from this dream.” Likewise, Tiana celebrates the “beautiful disaster” of their love on the chorus. Smooth and oh-so-soulful, the groove will have you wrapped around its finger before you realize it.

The visual for the track takes a little inspiration from Queen & Slim, as we see the EARTHGANG members and Tiana riding around the countryside in a vintage Mercedes that seems to have stalled out on the trio. However, they make the most of their circumstance and lack of a tow truck by singing their hearts out in and around the vehicle. Olu and Tiana share some intimate moments in the sunset and look beautiful together in front of director LX's lens.

“Collide” is the first single from the Queen & Slim: The Soundtrack. Starring Daniel Kaluuya and Jodie Turner-Smith, written by Lena Waithe and directed by Melina Matsoukas, Queen & Slim follows a couple on the run after defending themselves from a racist cop on a poetic Romeo-and-Juliet-meets-Bonnie-and-Clyde journey. In addition to the soundtrack featuring contributions from Ms. Lauryn Hill, Megan Thee Stallion and many others, the score will be composed by Dev Hynes, aka Blood Orange. Queen & Slim: The Soundtrack drops on November 15th, with Queen & Slim the film following shortly thereafter on November 27th.