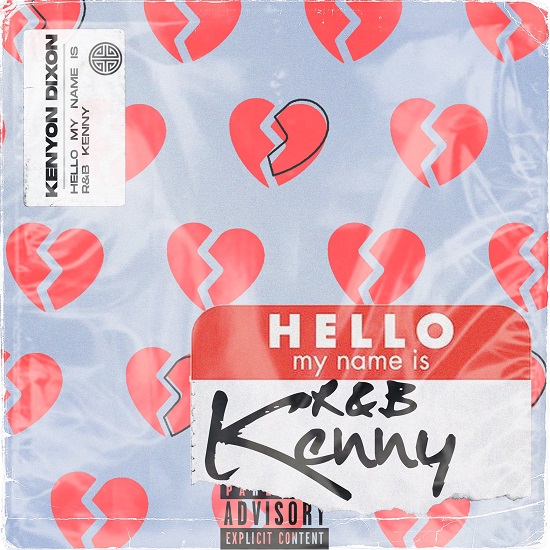 Kenyon Dixon is a name we're sure you've seen pop up a time or two here on SoulBounce. The singer-songwriter has worked with his fair share of stars from Alex Isley and Faith Evans to supergroup TGT and Justin Timberlake. He also dropped his N****s Get Emotional Too project last year to some acclaim. With the number of credits he has under his belt, you'd think he'd be a household name. He doesn't seem too fazed by the lack of name recognition, but he does reintroduce himself on his latest release R&B Kenny.

The newly released EP is a mix of six full songs alongside a few interludes that showcase not only his skill as a singer but just how immaculate his pen game is. The broken hearts on the set's cover explain the theme of the set, as he works through different phases of love (even if it all seems to eventually circle back to heartbreak). Tracks like "We Hurt Each Other," "LA Girl," "Better Naked" and "Just Your Friend" find him switching between sounds — from traditional and alternative R&B to smooth, head-nodding grooves and big, emotional ballads — with relative ease. However two songs really showcase his skills: the dark, hypnotic groove of "Freak" and the moving duet "I'm A Mess." "Freak" is just as sexy as its title suggests, with Kenyon's distorted vocal doubled and layered to lure the listener further into his lair as he offers up forbidden pleasure. "I'm A Mess" is on the opposite end of the spectrum, with Kenyon getting emotional over a simple piano backdrop. His inclination to include the severely underrated Amber Riley as his partner is inspired as their voices play well together and push each other to greatness.

It's impossible not to know exactly who Kenyon Dixon is after giving R&B Kenny a spin. Hopefully this will help to further the rise of his star as he continues to be a musical force to be reckoned with.