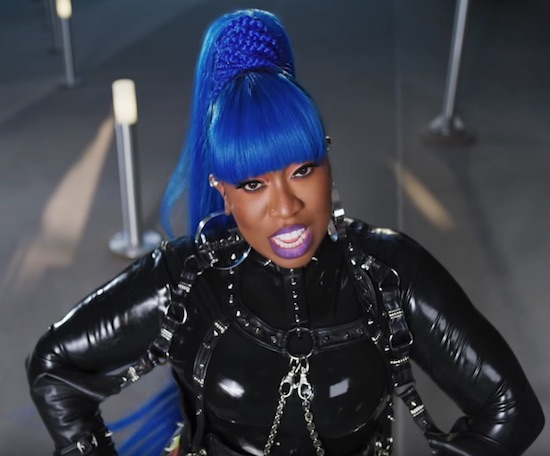 When it comes to this music video thing, there aren't too many people out there who can top Missy Elliott. She's proved this time and time again with inventive clips like "The Rain," "Hot Boyz," "One Minute Man," "Lose Control" and countless others. Her recent EP ICONOLOGY gave us another opportunity to witness her visual magic and so far she's delivered with a visual for "Throw It Back" and now a video for standout cut "DripDemeanor."

The bedroom-ready jam allows Missy to explore her sexual side as she starts the video clad in a skintight black leather number and bright blue hair. She might've joked about a slim waist in "Work It" but sis is looking rather svelte and tantalizing in the bondage-inspired getup. Meanwhile, her dancers are moving in synchronized perfection as they do some pretty amazing moves in the background. As the video progresses, we're introduced to guest Sum1 — who takes over the Tweet role on the track — and some other looks from Missy and her dancers, including a Day-Glo drip and a (literally) towering braided updo. Before Missy kisses us goodbye, though, we're reintroduced to Teyana Taylor's nutty curator of the Museum of Missy Elliott. She's still giving the youngster from the "Throw It Back" video her own personal tour while describing Missy's undeniable impact. However, through her talking, we learn that there's yet another visual chapter coming as "To Be Continued..." flashes across the screen.

Once again, Missy Elliott's drip has left us begging for more. Get you some when you peep the visual for "DripDemeanor."