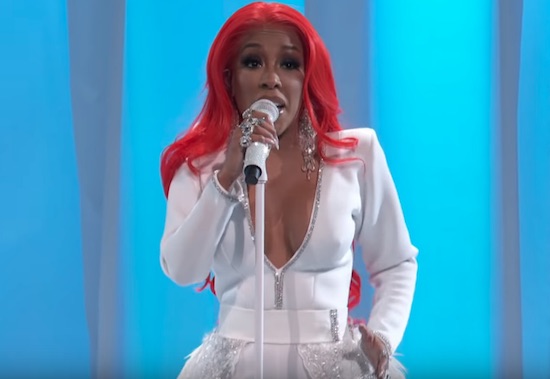 On a night where Jimmy Jam and Terry Lewis were being honored as recipients of this year's Legend Award at the 2019 Soul Train Awards, K. Michelle paid homage to the dynamic duo in her own unique way. Instead of straight-out singing one of their many hit songs as numerous artists would go on to do later on the live broadcast, she sang her current single "The Rain." For K., performing this particular song was actually a no-brainer as it borrows heavily from one of Jam and Lewis' famous productions, New Edition's 1988 classic "Can You Stand The Rain," and was the perfect tie-in for the celebratory evening.

For her Soul Train Awards performance, K. Michelle also decided to borrow a little bit more from N.E. Accompanied by four male dancers who were suited and booted in all white, they mimicked the group's slick look and mixed in their signature "Can You Stand The Rain" choreography with some more contemporary moves and pelvic thrusts. Also dressed in an all-white, feathery ensemble, K. stood perched atop a circular stage as she belted out the song. Her live vocals were strong, and she sang the scandalous number with her usual confidence. Known for shaking a table or two, overall this was a pretty subdued performance from K. Michelle who simply came through and did what she had to do.