Tinashe & G-Eazy Brag & Boast In ‘So Much Better’ 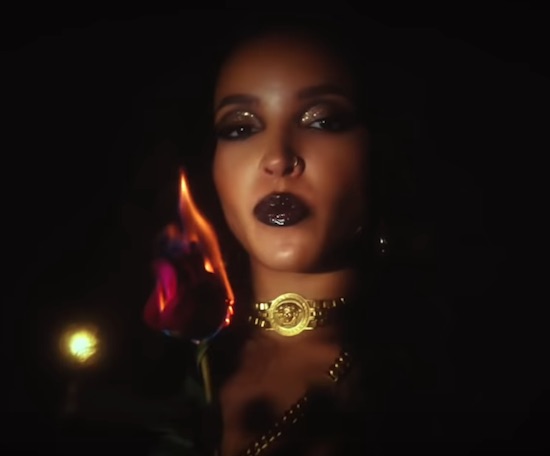 Our girl Tinashe is back on the scene! The songstress is now an indie player and flexed her independence with the release of her newest album Songs For You. The set, which features her jam "Die A Little Bit" and recent single "Touch & Go," is perhaps her best yet thanks to being free from label constraints and the chart chase that comes with them. She's also getting a bit more creative and risqué with her visuals, like the one she just dropped for her G-Eazy collaboration "So Much Better."

The song itself is all about Tinashe's bedroom prowess as she lets it be known she's a "bad b***h" who couldn't care less about what you've had before. She coos and oohs all over the place over the song's slinky beat as she describes in pretty vivid detail what she can do to you. The video picks up on the sensual vibe as it captures the beauty in several fierce looks as she tantalizes and teases the camera. It's all captured in hazy soft focus as 'Nashe gets nasty and classy all at the same damn time. G-Eazy comes along for the ride, too, as he spits his verse in the driver's seat of a car that has its headlights beaming on Tinashe. Though his contribution is ultimately unnecessary, it does provide for one of the video's cooler shots.

The track and video fit the vibe of Songs For You nicely. The album finds the singer exploring similar themes as her previous work but with an edge that reaches beyond the pop sheen of her major label efforts. But don't just take our word for it. You can stream the album in its entirety below after you check out Tinashe getting her tease on in "So Much Better."


TAGS:  audio, G-Eazy, Tinashe
Previous: TJ Jackson Tries To Let Get Of Bad Love On ‘I Don’t Deserve This’ Next: Moses Sumney Delivers A ‘Virile’ Video With Announcement Of New Album ‘grae’