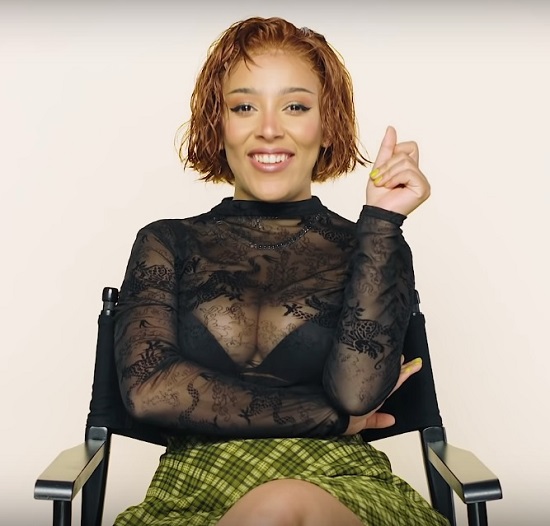 Doja Cat might owe a good deal of her current game to her viral meme of a song "Moo," but the rapper/singer is making the most of her time in the spotlight. She recently released her sophomore set Hot Pink to the masses and is currently on the promo trail for that effort. You know what means, folks! Yep, she's the latest artist to sit down and test their musical knowledge for a round of ELLE's "Song Association" series. So how did she do?

Well, like most who have been in the hot seat as of late, she relied heavily on her own catalog (which she, admittedly, tried not to do). That means she uses tracks like "Rules," "Juicy," "So High" and oddity "Waffles Are Better Than Pancakes" to rack up a few points. She was able to mix in a few out-of-the-blue selections to her advantage, though. Who else has brought up Quad City DJs' long-forgotten "Space Jam," The Strokes' "The End Is Never The End," Cardi B's "Bodak Yellow" and Busta Rhymes and Mariah Carey's "I Know What You Want" while sitting for one of these? Exactly.

Using diverse musical choices, Doja Cat was pretty successful during her go. While she didn't score a perfect 15 (she surprisingly couldn't think of a song using the word "check"), she came through with a respectable 14 points in her bag. What other songs did Doja come up with off the top of her head? Watch and find out!