Kali Uchis Is Fine With Being Solo In ‘Solita’ 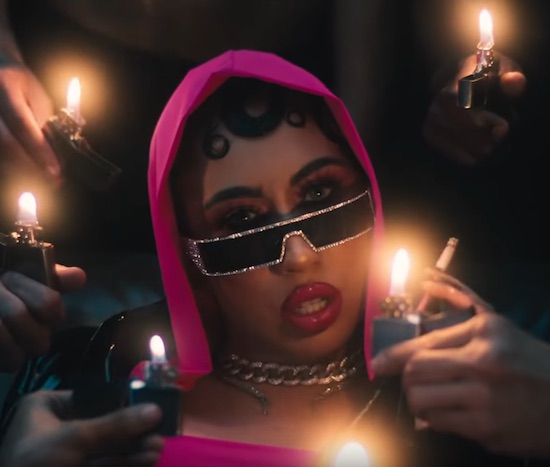 After releasing her debut album Isolation last year and a handful of collabs since then, Kali Uchis delivers a new solo track “Solita.” The word “solita” is Spanish for alone,” and the song is a slow-burning Spanglish number about being at peace with being single after a relationship ends. Inspired by a breakup of her own, "Solita" was co-written by Kali alongside Anthony Clemons Jr., Tainy, Sevn Thomas and Jahaan Sweet, and is a bass-heavy thumper with bouncy synths perfect for your Bounce Back playlist or doing your best Shakira body roll and hip wobble.

Anyone who has followed Kali Uchis knows that she loves to complement a great song with a dope visual. The Amber Grace Johnson-directed video for "Solita" doesn’t disappoint. The concept of the visual skews closely to the lyrics of the song, with a huge dose of creativity and visual flair. Kali arrives on the scene like an otherworldly Sleeping Beauty. She goes on to explore a strange new world, finding her own strength and beauty, along with the adoration of the opposite sex. The clip features a number of arresting visuals, including Kali playing with a snake, charming patrons at a strip club and other scenes of men salivating over the Columbian diva. The visuals are reminiscent of clips from Lady Gaga and Janet Jackson, but this is clearly Ms. Uchis’ show.

“Solita” will be featured on Kali’s upcoming sophomore album, which will be a mostly Spanish-speaking project. “For my next album, I’m really going back to my roots, experimenting more with my music, not thinking so hard and not trying so hard — just free-flowing,” she's said about the project that is expected to arrive next year.