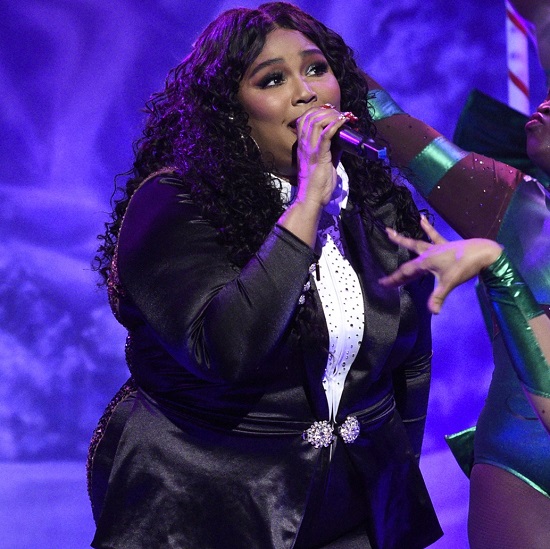 This past Saturday, all eyes were on Saturday Night Live's last episode of the year. That's because a sorta-kinda well-known comedian by the name of Eddie Murphy was making his return to host the show after leaving the venerable sketch show some 35 years ago. While Mr. Murphy was taking up a good deal of the shine, the program also managed to pull one of the year's biggest entertainers as the musical act: Lizzo. In fact, the singer/rapper (who's having the biggest glow-up since Cardi B and her bloody shoes ran away with 2018) made her debut on the program and brought her message of self-love and positivity with her.

Though her recent bout with the flu had people wondering if she would cancel her appearance, she appeared to be in good spirits and form for the show. For her first set, she trotted out her tried and true hit "Truth Hurts" with an all-female band. Everybody was draped in Dapper Dan Gucci 'fits, with Lizzo rocking a fitted trench dress and Gucci boots to deliver a raucous, rock-and-roll take on the Billboard chart topper. Her second performance brought a winter wonderland to the stage as she performed her track "Good As Hell." While dancers swirled around candy-cane-striped stripper poles, the performer rocked a tuxedo jumper while singing the empowering anthem. This being Lizzo, she also made time for a brief twerk break. And it was then that she revealed that the back of her jumpsuit was nude and decorated with an assortment of sparkling crystals.

Judging by the big ear-to-ear grin on her face, we have a feeling that Lizzo already got her Christmas wish. Watch the entertainer of the year two times over in the clips below and stick around to catch a sketch with her and SNL's Aidy Bryant that was cut for time.