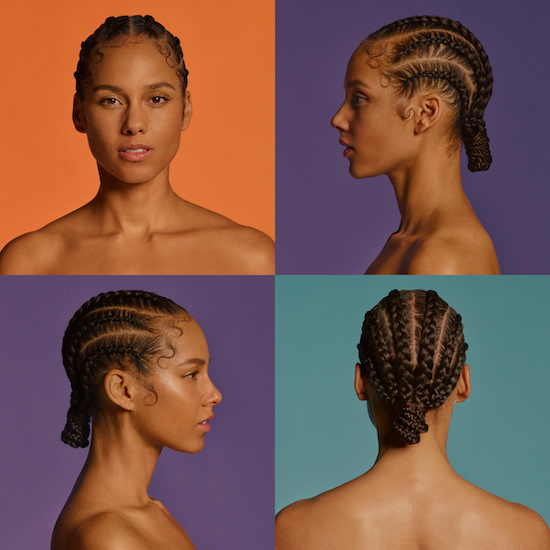 For the past few months, Alicia Keys has been entertaining her fans with singles "Show Me Love," "Time Machine" and, most recently, "Underdog" in the lead-up to her next album. Mrs. Keys-Beatz has now confirmed that her seventh studio album (and eighth overall), ALICIA, will be released on Friday, March 20th, and she's unveiled the colorful album cover to let us know it's real. Alicia keeps it simple for her album art with photographs of her from the shoulders up against different colored backgrounds from the front, back and both sides. She's once again rocking her fresh-faced and makeup-free look, straight-back cornrows, slicked down edges and bare skin. Her braids are a nod to her early Songs In A Minor days, and she honestly looks just as young as she did in 2001 when her debut dropped.

In addition to dropping the ALICIA album cover and release date, Keys has announced that she taking her show on the road on ALICIA THE WORLD TOUR. Described as "a meditation on love and life," the massive outing begins in June where she'll kick off everything in Europe. She'll travel around the continent for a good six weeks through mid-July before taking a brief break. She'll pick her mic back up in late July when she begins the North American leg in Jacksonville, Florida. Keys will hit major U.S. and Canadian cities including Atlanta, Baltimore, D.C., Toronto, Detroit, Seattle, San Francisco and many more. She'll wrap things up in September in Miami, but we have a feeling that the singer-songwriter-producer won't stop there.

There's definitely no stopping Alicia Keys in 2020. On Sunday, January 26th she'll return as host of the 62nd Annual GRAMMY Awards and her next book, More Myself, will be released days after her new album on March 31st. Tickets to ALICIA THE WORLD TOUR are on pre-sale now to American Express cardholders and will go on sale to the general public on Monday, January 27th starting at 9 a.m. local time. 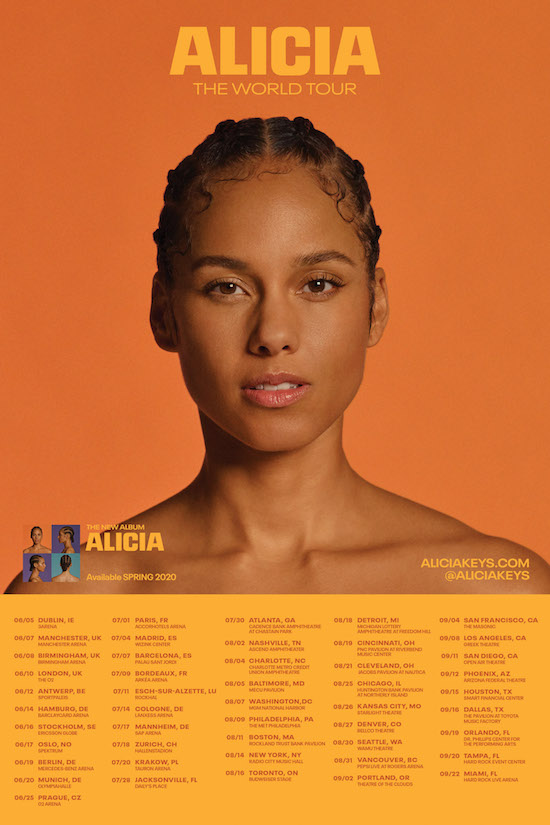 
TAGS:  alicia keys
Previous: Lion Babe Are Back To Make It ‘Hot In Herre’ Next: Ella Eyre Rings In The New Year With ‘New Me’