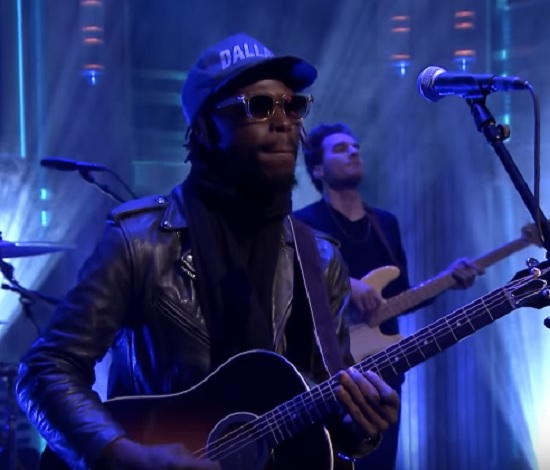 Austin-based music duo Black Pumas have seemingly come out of nowhere. Forming two years ago, the duo has taken the music world by storm with their self-titled debut. In fact, the album has netted them a Best New Artist nomination at this year's GRAMMY Awards and secured appearances on popular channels like COLORS and spots on major lineups, including an upcoming Coachella stint. Now that the world is finally learning their name, the duo is taking advantage of their new-found fame with an appearance last night on The Tonight Show Starring Jimmy Fallon.

The fellas chose their moving track "Colors" for the special occasion. The track, about taking the time to appreciate the world and life around you, is a soothing balm — especially seeing how divided the country (and the world) seems to be right now. Singer Eric Burton gets most of the camera's attention as he croons the song's poetic lyrics, performing with a quiet swagger that easily captivates. But guitarist Adrian Quesada also gets a chance to shine with a fiery guitar solo mid-track, proving that both musicians contribute equally to the band.

We don't know what the GRAMMYs will bring Black Pumas after all the awards have been handed out, but we do know that these fellas most definitely have staying power. Here's hoping that this is only the beginning of what they have to offer. In case you couldn't stay up late enough to catch it live, check out Black Pumas' performance of "Colors" right here.