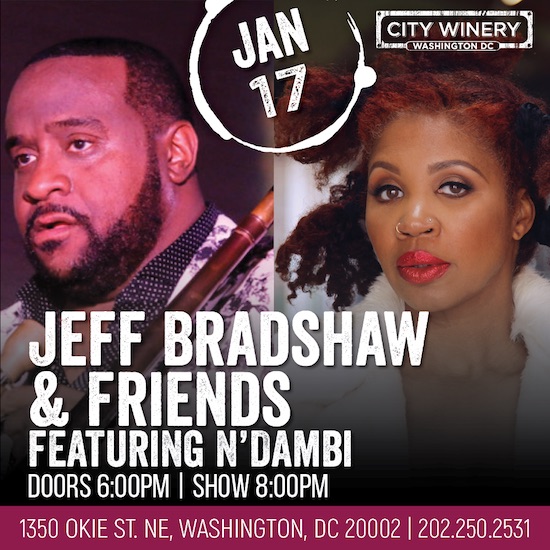 Jeff Bradshaw is well known as a trombonist who has played with a who's who of artists whom we know and love. Bradshaw's resume and friend's list are both pretty long. For the past few years, he's combined both with his Jeff Bradshaw & Friends concert series that he's taken around the country with a rotating list of artists. One of his favorite cities to perform this series in is Washington, D.C., and his DMV fans have something to look forward to when he brings it back on Friday, January 17th to City Winery DC. One of the friends who will be joining Jeff is powerful songbird N'Dambi. There will be some surprise guests, of course, but you'll have to be in the house to find out just who they are.

In order to be in the house at this show, you'll need a ticket and they are on sale now at the City Winery Washington DC box office and online. Tickets are moving fast, so if you're interested in attending you'll want to pull the trigger on purchasing tickets sooner than later. If you're on the fence, you'll be glad to know that our colleagues at City Winery DC have hooked us up with a pair of tickets to give away to one lucky DMV Bouncer. Enter to win on the next page, and it could very well be you!