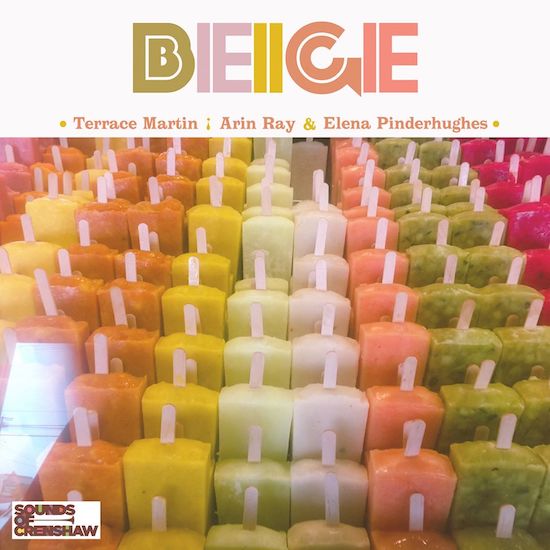 It looks like Terrace Martin plans to spend 2020 in the pretty much same manner as the previous decade – creating mellifluous compositions, orchestrating primo collaborations and delivering quality albums that transcend genre, space and time. He spent the latter half of 2019 teasing cuts from his highly anticipated DRONES project, and even managed to slip in an incredible update of "The Christmas Song" with Alex Isley and Kenneth Crouch. While he could've closed out the year at that point, having sufficiently encapsulated the warmth of the holidays, he wasn't quite done blessing our playlists.

Mr. Martin tapped multi-talented musician/singer Elena Pinderhughes and R&B crooner Arin Ray for his latest single "Beige."  The downtempo track blends elements of jazz and hip hop for a groovy backdrop. Their vocal chemistry is undeniable, but the relationship is far from perfect. Elena muses, "Seems like lately we’ve fallen all the way down/ It don’t feel the same now." Arin counters with his own version of events, singing, "If I’m being honest, babe/ I don’t really care for things like pressin', no extras, no testin' me, please."  The one thing they both agree on is that "Love don’t have to be so hard."

While one might expect a dramatic visual to mirror the song's emotional pull, the official video is quite the opposite but just as effective in getting its message across. Terrace and frequent collaborator Avo John Kambourian co-directed the simple black-and-white clip, centering on a couple at a restaurant. They refuse to communicate, barely acknowledging each other's presence, as their full attention and focus is reserved for their phones. Message received.

There's still no official release date for DRONES, but Terrace has been leaving a pictorial trail of crumbs via social media (photo ops or actual hints?) – including shots with Herbie Hancock, members of The Pollyseeds (Robert Glasper, Kamasi Washington, etc.), Dr. Dre, DJ Quick, YBN Cordae and more. All this in addition to previously released singles, "All I Own," "Trail Mix" featuring Buddy and Rose Gold, "Intimidated" featuring Lalah Hathaway and Rapsody, "The Deuce" featuring The Martin Family Trio and now "Beige." So yeah, we're expecting Martin and his Sounds of Crenshaw to dominate our 2020 playlists. In the meantime, keep up with the artist on Twitter and Instagram for more highlights and updates.