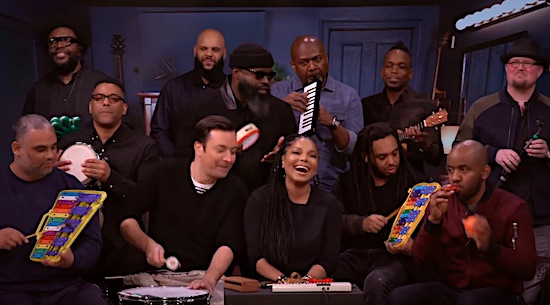 Janet Jackson has done countless live performances over the course of her illustrious career. But the veteran star of stage proved there are still ways she can delight and surprise us. That’s what happened when she visited The Tonight Show Starring Jimmy Fallon to discuss her upcoming 12th album, Black Diamond, and participated in one of their infamous "Classroom Instruments" sessions. Metallica, Mariah Carey, Madonna, Adele, Aerosmith and other legends have all sang their hits to the tune of a multicolored xylophone and recorder. Now it’s Miss Jackson’s turn to give us a grade-school rendition of her song "Runaway."

Backed by The Legendary Roots Crew and a collection colorful instruments that Janet’s son Eissa would adore, the team of legends (and one comedian) recreated Janet's 1995 hit. Beyond the comical high jinks of Questlove using a pair of clapping hands for drumming, Black Thought shaking his tambourine and Jimmy Fallon throwing colorful flags, the performance was cute, engaging and fun.

Along with the spirited performance, Janet also sat down on The Tonight Show couch to discuss her career. Jimmy ran down the list of the many accolades the star has earned over the course of her career — Oscar nomination for Best Original Song, first woman to be nominated for the Producer of the Year Grammy, 27 Top 10 hits, records for most consecutive top 10 hits on the US Billboard Hot 100 chart by a female artist and the first and only artist in history to have seven Top 5 hits from one album — to her slight embarrassment. She also shared the inspiration for the song "Nasty" and her son's musical skills.

Speaking of performances, the star is scheduled to start her Black Diamond Tour this June in Miami, with stops in the continental United States and Canada — including once again headlining the ESSENCE Music Festival in New Orleans during Fourth of July weekend. Check out Janet Jackson on The Tonight Show below while we wait to see what she has in store for her latest tour and album.