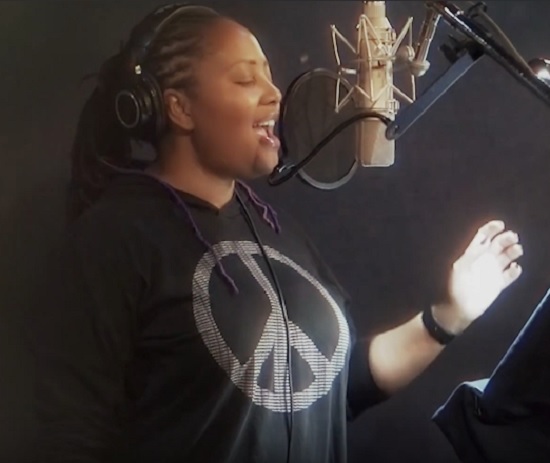 Last summer, the vaults were opened on lost Miles Davis album Rubberband. The set, which had been shelved since the mid-1980s, saw the melding of Miles' classic style with a bit of R&B luster thanks to the inclusion of vocalists such as Lalah Hathaway. Lalah is featured on the album's most romantic track, "So Emotional," which also happens to be the first song from the set to get the music video treatment.

To facilitate the interaction between Lalah and Miles through the decades, video footage of Lalah recording the track in studio is mixed with classic pictures and video of Miles during the period that Rubberband was originally created. Showing the song's creation alongside the man himself in his element helps to connect the dots between what Miles created then and the song that has come about now. While the singer brings her own unique energy to the proceedings, her vocal plays off the jazz man's trumpet playing quite well. It's almost as if the two are having a musical conversation, with Miles calling the shots from the past as Lalah responds in kind in the present. The video also shows a bit of the behind-the-scenes magic that brought this musical moment to life, including drummer Vince Wilburn Jr., who is the nephew of the late great jazz legend.

Though we would've loved to see Miles Davis and Lalah Hathaway get a chance to perform this one together, this artistic visual mashup is perhaps the next best thing. Check out Lalah doing Miles proud in the video for "So Emotional" below and pick up your own copy of Rubberband here.