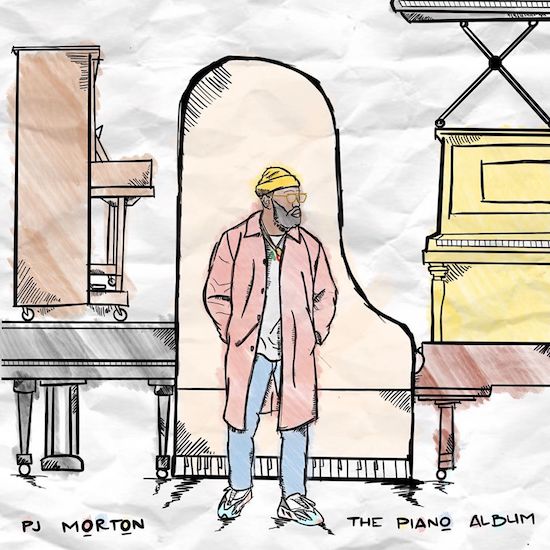 Last year around this time PJ Morton announced his Keys And A Mic Acoustic Tour, which found the multi-talented artist giving his full band a break and hitting the road with just his piano and his backing vocalists The Amours for a brief run. It was no surprise that the concerts sold out immediately, making the intimate shows one of the hottest tickets last spring. In case you weren't one of the lucky few to catch PJ on that particular tour, he has decided to bless the masses with The Piano Album, a new career-spanning acoustic album that captures the essence of those shows.

Days before collecting his latest GRAMMY Award for Best R&B Song with JoJo for their duet "Say So" a few weeks ago, Morton gathered her and a few more of his talented friends together at Conway Recording Studios in Hollywood to record The Piano Album. Seated at a grand piano and tickling the ivories with his usual ease, PJ was in his element and in good voice as he began with a live rendition of his single "READY," taken from last year's PAUL album. A smooth transition into "DON'T BREAK MY HEART" followed with Rapsody hopping on the mic to spit her bars at the start of the track. PJ then invited JoJo to join him at the piano and together they effortlessly blew the roof off of "Say So" in a swoon-worthy performance that elicited hoots and hollers from the in-studio audience.

PJ didn't just pull from PAUL for The Piano Album. He reached back to Gumbo for a touching rendition of "First Began" and "Go Thru Your Phone" with some help on ad-libs and backgrounds from all the singers in the house before digging deeper into his crates to pull out "Two Hearts" from Live From LA and "Mountains And Molehills" from Walk Alone.

In addition to Rapsody and JoJo, PJ was joined by MusiqCity Walls on "Everything's Gonna Be Alright," which turned into a rousing sing-along jam session, and The Walls Group on "Let Go, Let God," a song that Morton wrote that was originally sung by DeWayne Woods. PJ and his guests had the studio sounding like a Black Baptist church on Sunday morning. After that gospel moment, he asked soul music royalty Alex Isley to join him for a live version of his GRAMMY-winning cover of "How Deep Is Your Love." She filled in beautifully for Yebba and showcased her angelic vocals, helping to bring The Piano Album to a glorious, gorgeous end.

As if releasing The Piano Album wasn't enough on Valentine's Day, PJ also decided to release the full performance video of the recording session. Just as he did for his Gumbo Unplugged live album, Morton filmed the complete session from beginning to end and released it on YouTube. Shot by Matt Robinson and Jade Ehlers, we get to see who else was in the studio, spotting familiar faces such as his wife Kortni Morton, songstress Emily King, comedian Kev On Stage and vocal coach to the stars Stevie Mackey. The film features animation by Brik.Liam, who was also in the house, and lyrics to each song, compelling you to sing along and join in on the fun PJ and friends are having. The full video of the recording of The Piano Album also includes brief stories and touching moments that aren't heard on the album, making it a must-watch to get gain some insight and perspective.

With the release of The Piano Album and its film companion, PJ Morton has already astounded us for 2020, and it's only February. There's no telling what the next 10 months of the year will bring, but knowing PJ and his prolific nature and relentless drive like we do, we are positive that he has more musical surprises waiting in the wings.