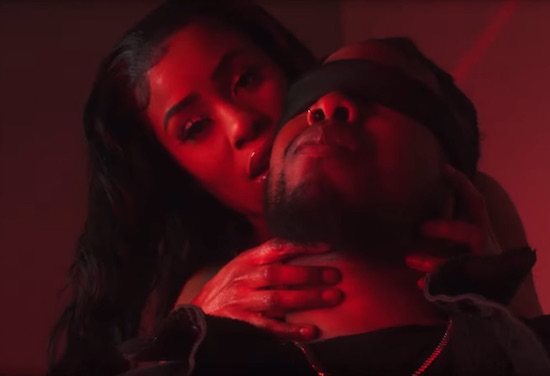 Singer-songwriter LaDé released her debut single "Teaser" on Valentine's Day, and it was the perfect addition to playtime playlists. Singing in both English and her native French, the Congolese-Canadian temptress sang to an ex-boyfriend to let him know everything that he was missing. We get to see that scenario loosely play out in the music video for "Teaser," which we're presenting in a SoulBounce exclusive world premiere.

Directed by Jacob Ettinger, the "Teaser" visual starts with LaDé sitting at home looking at Polaroid pictures strewn across her coffee table. She calls up a friend, and her girl gives her a much-needed boost. "You're too cute for that," the sassy voice on the line tells her. "You are that bitch! Just do your thing and show him what he lost." So said, so done as LaDé takes her friend's words to heart and slips into some sexy red lingerie while the music starts. She's alone in her living room, giving sultry looks to the camera, but in a blink of her eyes, she's transported to a dark room lit with fluorescent lights and her ex sitting there blindfolded. Now dressed in a bright pink two-piece, she dances up on him and touches him all over while he sits there helpless to her enticing ways.

See how LaDé uses her feminine wiles to show her ex a thing or two in the video for "Teaser," and keep an eye out for her debut EP to be released this summer. Follow the artist on Facebook, Twitter and Instagram for more.


TAGS:  Jacob Ettinger, LaDé
Previous: Denai Moore Announces ‘Modern Dread’ & ‘Cascades’ Into Her Psyche Next: Follow Lola Young To Her Bedroom For A ‘Pick Me Up’