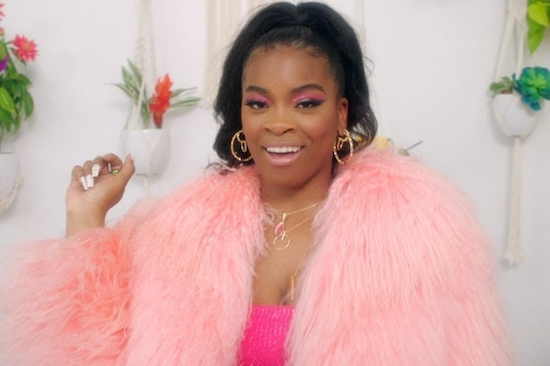 Way back in January, which feels like 3 years ago instead of a mere 3 months, J. Cole's Dreamville collective released Revenge Of The Dreamers III: Director's Cut. The project served as a deluxe edition of 2019's Revenge Of The Dreamers III mixtape and featured tracks from that collection in addition to a slew of new songs. Included in that newness was the single "BUSSIT" by Ari Lennox, a sexy little number that made its way onto our personal GTD and SoulBounce Selects: 1.20 playlists.

Lennox keeps the sexy vibes going in the music video for "BUSSIT." Director Tajana B. Williams creates a fantasy beauty salon where Ari and her girl crew go for some pampering and primping. In between getting serviced, they sip on mimosas and take breaks to twerk when the music gets good to them. Ari serves up multiple glam around-the-way-girl looks in shades of pink in the salon and wears the hell out of a patterned catsuit in other scenes. She's clearly been working on her fitness and is giving us body and beauty goals in the clip. When the camera veers from Lennox to her girl gang, they delight with their own pastel glam and tantalizing dance moves.

In addition to this new visual, Ari Lennox recently dropped the 3-song Shea Butter Baby Remix EP at the end of March. Our girl Ari is doing her part to make this quarantine a little more bearable and beautiful.