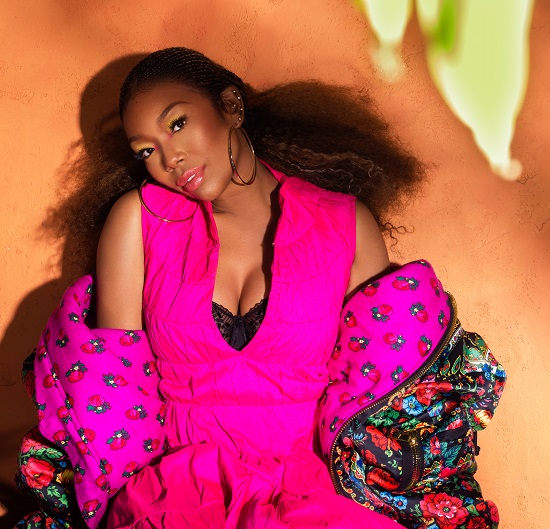 SB: We have to ask, so with "B7," do you have a name for the album yet that you’re willing to share?

B: Yes! The fans named it B7 because this is my seventh album and seven is the number of completion. I definitely feel super complete after this project. I've come such a long way and to be in this great space musically and to have really strong, solid feelings for the music that I was able to experience. It's just the perfect name, I think, for the album.

SB: Can we get a release date or are you holding on to that for later?

B: I don’t like to say release dates until I'm certain about it. I don't want anything to change because I've disappointed fans in the past [by] saying a date and then it didn’t happen. Even with "Baby Mama," it was supposed to be released a little earlier than it actually came out. I felt so bad about that, so I don't wanna jinx anything. But I definitely will have an album in 2020. Summer, for sure.

[ed. note: Brandy has since revealed that the album will be released on July 31st.]

SB: So with your single "Baby Mama" coming around Mother’s Day, we were wondering, what’s the best advice that your mother [Sonja Norwood] ever gave you?

B: Oh my gosh, she's given me so much advice. But I would have to say some of the best advice she's given me has been to stay true to myself. Don’t look to the left, don’t look to the right. Pay attention to you, your dreams, what you feel is best for you and let that voice grow inside of you. Then you will accomplish anything that you want. I think with my mom, she’s always wanted me to be just true to me because in this business you have a lot of opinions. You have a lot of people speaking into your life and what they think you should be and how you should be. And your own voice can kinda get drowned by other people’s thoughts and other people's voices. So it was always important for her to uplift my own light, my own voice inside of myself. And I appreciate her for that. She still does that to this day and I’ve been able to pass that on to my daughter and see her confidence just shine through at 17 years old. I’m just so proud of that one thing that she taught me.

SB: Can I just say that I cannot believe that Sy’rai is 17 years old.

B: She's 17. I can’t believe it either. [laughs] I mean, time flies. Just yesterday she was seven. You know what I mean? It's scary because she's a young lady and she’s growing into this adult. She’s my baby and I don’t want her to grow up too fast. So I’m just [gasps] nervous. Pray for me on that.

SB: I definitely will. And she also just released a single, which is amazing. How do you feel about that?

B: I feel great about it. I feel like she's in a great place in her music. I feel like she's still developing and she's giving herself time. And I think it was very brave for her to share her take on "At Your Best." She loved Aaliyah — we both love her so much — and we love that song. So she wanted to express that and also make it her own in her own expression. I'm just so proud of her and that she did that. It takes a lot of guts to share your music because music is a very vulnerable way to express yourself. You have to really be honest and I was blown away by that. I just can’t wait to see everything else she grows into because she’s a great songwriter, she’s a great singer. I just want her to take her time with it.

SB: We wrote a review about the single and I have to say we were pleasantly...I don’t want to say surprised because I knew she had the talent because, I mean, you’re her mom. She has the talent.

B: That's great. Thank you. I can’t wait to tell her. Anyone that mentions her or says nice things about her music, I always tell her and it makes her want to continue. It’s really motivation for her to continue what she’s doing, so I’ll make sure to tell her that.

SB: So, back to B7, this is really your first time going indie. What is different about that process than it would be with a major label? Did you meet any challenges or have a moment where you thought, "Oh this is much easier than I thought it would be"?

B: I feel like I have more creative control. I feel a lot freer in my art. That's different because when I was with different labels it didn’t feel like I had a hold on what I was doing. Not to say that you don’t need a team, because I have a great team at eOne and my management team. But it feels like I just have a little bit more control. Now that I have a vision for myself, I feel more confident that it can actually come into fruition. It can actually manifest because I've been given the opportunity to own myself and have my own say in what I’m doing. It took me a minute but I’m finally here and I’m thankful to be here in this position.

SB: And it seems like you’ve been a lot more hands-on. I know you’ve done some producing as well with this project.

B: Yes! And that’s interesting because, you know, I’ve been vocal producing for such a long time and I had the pleasure of learning from the greatest, LaShawn Daniels. So I’ve been vocal producing for a bit, so I’ve always loved beats but I just never know how to collaborate and the beat-making process. But I've been able to do that on this new album and have been able to write more and find my own way to express myself through lyrics. You know, I've dibbled and dabbled in writing but I’ve never done it as much as I’ve done it with this album and I’m just so proud of it. I can’t wait to do more and more and more music. It's like a whole new inspiration because I am producing now and writing and it's like a whole new version of myself that I didn’t know before. I feel like, in some of the situations I’ve been in, that was like a block. And I just realized and discovered on this new project that these are the other gifts that I've been blessed with and I just want to nurture them and use them as much as possible.