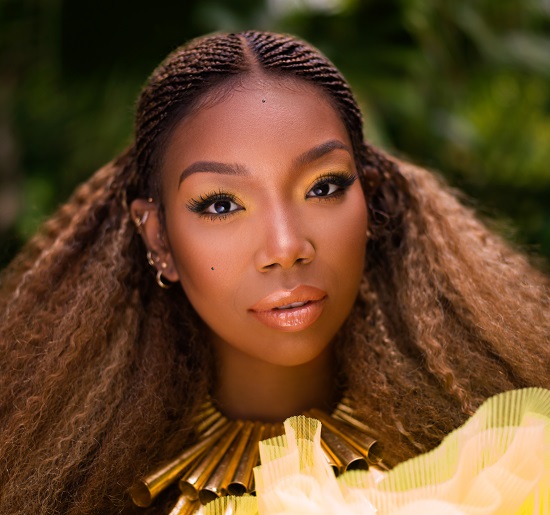 SB: Speaking of LaShawn, I actually did have the pleasure of meeting and speaking with him. He was an amazing person.

SB: His loss hit us all pretty hard. Do you have a favorite memory of him that you’d like to share?

B: I feel like I lost my mind for a while just not being able to handle what happened with him. I was supposed to work with him three days after [the day] he passed away, so it was really tough for me to just wrap my mind around the whole thing. There are so many great memories of LaShawn. I just remember him feeling bad for me in this one moment. I've never shared this before, but he felt so bad for me because I didn’t really understand what was it about me [and] my voice that was special. And he said, "Damn, you really don’t get it." He said, "It's not your runs, it's not your range, it's not any of that. I mean, that's a part of it. It's not your harmonies, it's the tone of your voice. And that completely separates you from anyone. That's what makes you unique." For him to tell me that...he told me that at 39 years old. I didn't get it all these years. And when he told me that, it just opened up my entire spirit. And I will forever be indebted to him for that because I didn’t know before that. You have it in concept, but I didn’t know until he really broke it down to me in that way. That was a very special moment. But LaShawn was always making me laugh and just such an angelic being on this planet. I don't think that I've ever met anybody like him. He just told me the most special thing about me and I'll never forget that. Nobody quite put it the way he put it. He just taught me so much about myself, about music and just about life in general. And God, you know? I don’t know if I have a favorite memory but…

B: Huge. Because if he never told me that, I don’t know if I would have ever known it. He prepped me for a lot of things that are ahead of me. I’m sorry I’m getting a little emotional.

SB: It's also unbelievable that it’s been over 25 years since you stepped on the scene with "I Wanna Be Down." If you could go back and tell baby Brandy what grown-up Brandy knows now, what would you tell her at the beginning of her career?

B: I would tell her to stay focused on you and everything will work itself out. It always has, always will. Just keep going. Never give up. I think that’s what I did. I didn’t know I was doing that but I never quit. I’m still here and I’m still proud to be here doing what I love to do. But I would definitely just ease her worry or fear, if any, and just tell her that everything will always work out in your favor.

B: That's such a loaded question. [laughs] Such a loaded thing to kind of think about, you know?

SB: We try to get deep questions.

B: You got the deep questions. I’m over her shedding tears and... [laughs]

SB: I want you to feel free to talk as much as you want.

SB: We’ve all grown up with you acting wise. You had Thea, you had Moesha. One of your most recent acting roles was as Cassie on Star. You seemed to be having the time of your life playing that role.

SB: This was the first time that we saw you in that “bad girl” sort of way. What was it like playing Cassie and what do you think you learned from it?

B: It was such a great experience because Cassie is nothing like me. So, it tested my acting skill because I knew I had to bring it because it’s Lee Daniels. It’s Queen Latifah. I knew I just had to let go and trust the process and the work that I was doing. It was a lot of fun just to play somebody opposite of who I am. I found the comedy in Cassie and I also found the unconditional love that she had beneath all of the tough exterior. She definitely had a heart. I used the love that I actually have for Queen Latifah because I love her sooo much. She’s like a big sister in my head and it just so happened that she was my sister on TV. I used that to show that unconditional love that she had for [Queen Latifah’s character] Carlotta. She was so layered and I just had a great time challenging myself to bring authenticity and a truth to a character I never thought I’d be able to do in a million years until I got the opportunity to do it. I miss Cassie, too. I miss playing her.

SB: Yeah, you seemed like you were having a ball. You even got a #SavageChallenge video.

B: I know. [laughs] I saw that. iComplexity always makes those great videos and he never leaves me out of 'em. So it was great to see that Cassie one. Cassie was definitely a savage, for sure. Classy, bougie...and rachet, OK?