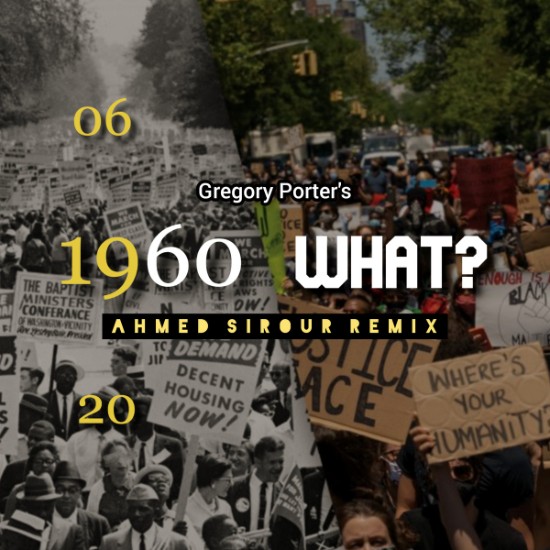 Despite numerous news reports, articles, social media posts and a Google Doodle for crying out loud, half of the country ("45" included) is still out here acting like they don't understand (or care) about the significance of Juneteenth. It's all good, though. We will not keep silent! In solidarity with the movement, artists have been dropping some serious heat to express their frustration and provide a soundtrack for protest. Add SoulBounce fave Ahmed Sirour to the roster with his latest tune, a revolutionary flip of "1960 What?" by Gregory Porter.

"I have been wanting to remix since I first heard it in 2010 on Gregory Porter's debut album," Sirour confesses. "It's the perfect song that I feel reflects what is happening now, which is like a mirror reflecting movements of the past merging themselves into our own era...same as this remix."

Ahmed left no detail overlooked, even down to the cover art that offers a "then and now" depiction of protests and also highlights the date of 6/19/20. The track itself delivers a ferocious twist on the original, starting out with some hard truth from Senator Ernie Chambers (taken from Oscar-nominated 1966 documentary film A Time for Burning, when he was a barber and community leader). Samples from Fela Kuti's 1976 classic "Zombie," along with its 2004 Bugz In the Attic remix, provide an injection of soulful adrenaline and an air of defiance. In addition to the anointed guitar and bass line, Sirour incorporates additional percussion, synth bass lines, keys and breaks. A powerful sound clip of chanting protestors from a Seattle Black Lives Matter march ties everything together perfectly.

"I hope you not only vibe and dance to this, but that you take in the significance of what is being said and the time in which we live," Sirour implores. "Hopefully it will just be a snapshot of the past and not simply another reflection of times yet to come. May lasting peace follow this current storm," Amen, Brotha Ahmed. Amen.

In celebration of Juneteenth, Bandcamp is donating 100% of their share of today's sales to the NAACP Legal Defense Fund. After previewing "1960 What? (Ahmed Sirour remix)" below, head to Bandcamp TODAY to support independent artists and a great cause.