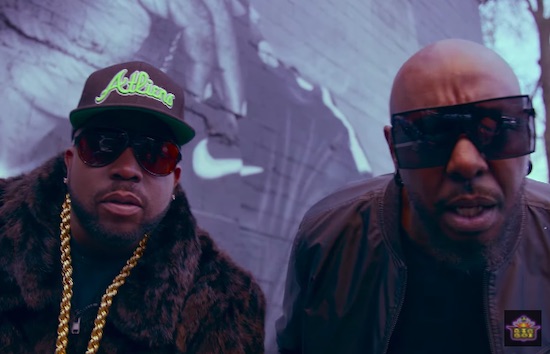 It was over one year ago that Big Boi, one of half of the legendary duo Outkast, and Organized Noize's Sleepy Brown first revealed that they had a collabo album in the pipeline. Although it didn't see the light of day in 2019 as promised, it seems that things are finally gaining steam with the release of the duo's new single and video, "Can't Sleep."

The song finds the Dungeon Family cohorts sharing their gripes about being kept up all hours of the night by the ladies blowing up their phones. The smooth track is reminiscent of some of Daddy Fat Sax's earlier material, complete with a soulfully, catchy hook; a hefty dose of bass and a classic sample via The 5th Dimension’s “(Last Night) I Didn’t Get To Sleep At All.”

For the simultaneously released music video, Big Boi and Sleepy Brown are surrounded by a bevy of scantily, clad women in front of an uber-realistic Outkast mural located in Atlanta's Little Five Points neighborhood. As they peer into the trunk of a car, the two are then pulled in by a set of wires and seemingly transported to another world. Like the song, the low-key video is classic Big Boi, featuring the ATLien decked out in a fur jacket and some bling as he cooly puts it down.

"Can't Sleep" serves as a perfect reintroduction to what fans can expect from the paid and follows the first single to drop from the project, "Intentions" featuring CeeLo Green. While there's still no release date for the album, which is tentatively titled The Big Sleepover, Big Boi took to Instagram to stoke the flames of anticipation, promising fans that the album is "on the way." Until then, sink into this lighthearted number from these Atlanta legends.