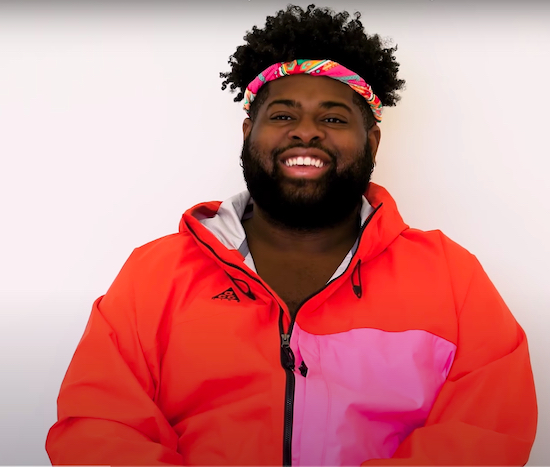 As he nears the July 17th release date of his debut album, Pink Planet, singer Pink Sweat$ has seen a flurry of activity these days – dropping a new single, releasing an animated lyric video for another single and joining the good folks at ELLE for a socially-distant game of "Song Association" in less than a week.

He kicked things off on Juneteenth with the release of "Not Alright." Though he initially planned to include the song on his album, the current socially-charged climate compelled him to release it early. "'Not Alright' is a song I wrote about the wide range of feelings you experience being Black in America," he revealed in an Instagram post. "A lot of us are not alright, but you're not in this fight alone."

Produced by John Hill and Kenneth Wright, the song's driving uptempo beat lies in stark contrast to the dark reality of lyrics like, "'I’m not alright / Fighting a war that I’m gon lose / I’m not alright / I can’t do what they say I’m supposed to / I’m not alright.” Sweat$ admitted in the same Instagram post that it was important for him to use his platform to promote positive change and love.

He then turned around and kickstarted the week with a game of ELLE's "Song Association" from home. He prefaced the fun by admitting that his limited musical knowledge might work against him. "I'm going on record and saying I didn't grow up listening to a lot of music. I think I'm about to expose myself, but it's all in good fun," he confessed immediately before diving into the game. Despite his mea culpa, he goes on to score 14/15 with relative ease. While his harmonies and the lyrics may have been shaky, Sweat$ reveals a wide array of musical references as he sings everybody ranging from Kanye West to The-Dream to Blackstreet to The Trammps.

With no plans of letting up, he then dropped off the animated visuals to "17," a song he originally released back in February. The sweet clip revisits the sentiment of the original video, giving viewers an intimate look into a couple's relationship over time. The tender ballad provides the perfect backdrop for any love story.

As previously mentioned, the singer's highly-anticipated Atlantic Records debut is set to drop July 17th. In addition to "17" and "Not Alright," Sweat$ has already released "Ride With Me" and "Cadillac Drive," both of which were featured in Season 4 of HBO's Insecure. Take his latest releases for a spin as we wait to see what else this newcomer has up his sleeves.