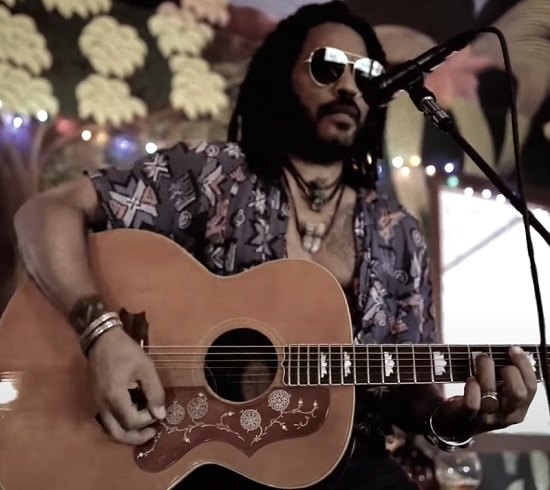 Lenny Kravitz has never been one to shy away from the political. Whether it be with his 1989 debut Let Love Rule or his most recent effort Raise Vibration, Lenny has always asked us to look inward and outward for ways that we can change the world for the better. It's no surprise, then, that he brought that sense of communal duty to his appearance on NPR Music's Tiny Desk (Home) Concert series from his home in the Bahamas.

He takes us through the span of his career with a three-song set, starting with his 1998 track "Thinking Of You." The song, a touching tribute to his late mother Roxie Roker, sounds just as good as it ever did. But he gives a new angle when speaking after its conclusion. "This song was written many years ago after the passing of my mother," he says. "Today, I'd like to dedicate this song to all of those who are not able to be with their loved ones during this time of isolation and to those who are not able to be with their loved ones during their transitions. Like George Floyd, whose last words were, 'Mama, mama.'" He continues to challenge us by asking us which side of history we're standing on as he segues into "What Did I Do With My Life." The track, from his 2004 effort Baptism, questions the roles we've been taking on while making it through this thing we call life. After bringing us that moment of introspection, he brings us together with Raise Vibration track "We Can Get It All Together," itself a call for unity as we seek a better way of life.

The performance accomplishes what Lenny Kravitz does best, which is leave us feeling good while calling us to act in the name of the better good. If there was ever a time we needed to hear his undying message, it's now. Get into Lenny's Tiny Desk set and don't forget to take heed of the message he's giving.


TAGS:  audio, George Floyd, lenny kravitz, Roxie Roker
Previous: Radiant Children Continue To Find The Beauty In Self-Care With ‘Mariposa’ Next: Shawn Stockman Pays Tribute To Black Women In ‘All I Do’