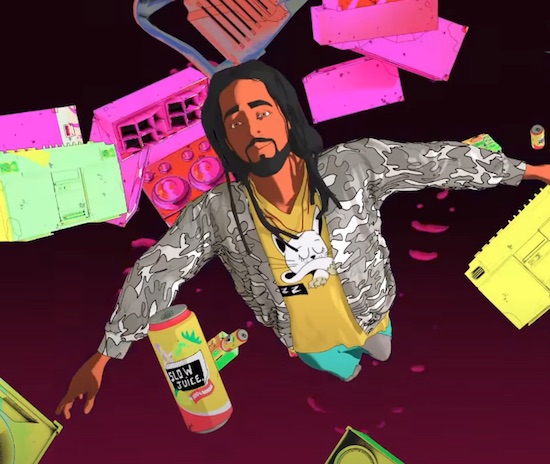 Skip Marley and H.E.R.'s duet "Slow Down" has proven to be the gift that keeps on giving. The late 2019 release broke away from the pack this past winter when they dropped the sexy music video at the top of the year and got a second wind this spring with the release of a remix featuring Wale. The DMV representer added a verse to the beginning of the song that fit smoothly into the track, making sure not to disturb the groove already established by Skip and H.E.R. Now that summer is in full swing, Skip and company are keeping the momentum going with a music video for the remix, and it's an animated extravaganza.

Director Tim Fox introduces us to a colorful, futuristic city at the video's onset. During Wale's verse, an animated version of Skip Marley is seen posted up outside of a club in the desert, sipping on a can of "Slow Juice" and watching a breakdancer do their thing. We're not sure what exactly is in that can, but the next thing you know Skip starts hallucinating and sees flashes of light and color and objects floating through the air before he winds up standing high atop the club. He comes back down to earth and hops on his tricked-out skateboard with colorful plumes of smoke trailing behind him. As he makes his way around the city, we peep a George Floyd mural, Black Lives Matter graffiti and Breonna Taylor and Rayshard Brooks' names scribbled on walls.

When it's time for H.E.R.'s verse, she's replaced by a character wearing a cat's head who flys through the air to join Skip who's now accompanied by another stranger. The stranger has a set of magical keys that he tosses to Skip, and the now trio ride out to a function in the middle of the desert. After dropping their car off at the valet, they step into the alternate universe of ZOOOOM and are welcomed into the trippy atmosphere. While there, they join in on virtual reality fun and start dancing and floating in the air with the rest of the patrons. The video ends with Skip and his crew hopping back in their ride and setting off into the sunset after having big fun with the wretched.

The "Slow Down (Remix)" video packs a lot of imagery into its almost four-minute runtime. What most of it means or has to do with the song – or anything for that matter – we don't know, but we do appreciate the Black Lives Matter messages and calls for justice for those unjustly killed by police sprinkled throughout. That alone makes this video worth watching.


TAGS:  Breonna Taylor, George Floyd, H.E.R., Rayshard Brooks, skip marley, Tim Fox, wale
Previous: DUCKWRTH Comes Through With A Sexy Jam On ‘Coming Closer’ Next: India.Arie Wants To Get Off Of This ‘Rollercoaster’