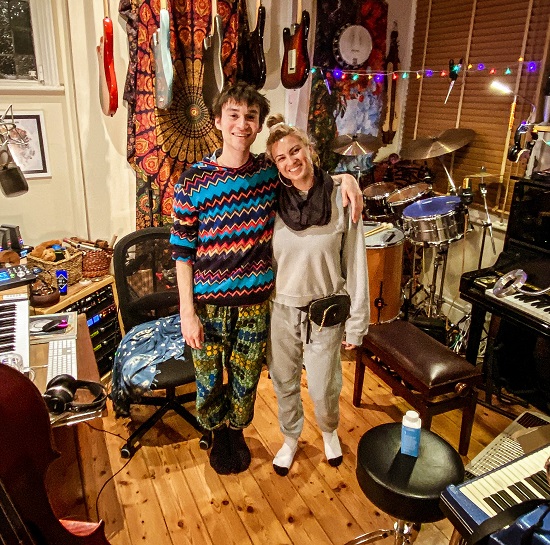 We're just under two weeks until the release of Djesse Vol. 3, the upcoming album from musical mad scientist Jacob Collier. The talented Mr. Collier has been giving us choice cuts from the collection featuring a who's who of the current crop of music stars — including "He Won't Hold You" with Rapsody, "Time Alone With You" featuring Daniel Caesar and "All I Need" with Mahalia and Ty Dolla $ign. Now he's gone and linked up with singer-songwriter Tori Kelly for their funky duet "Running Outta Love."

Jacob once again shows out on the song, laying down a stank-face-inducing bass line as the frame of the track along with a slapping kick drum. Surprisingly, outside of a few guitar embellishments and some tinkling piano in places, the rest of the track is comprised of their beautifully layered vocals. Tori's voice is the first you hear, with her laying down a smoky first verse in which she describes how enamored she is with him. Jacob responds to her notions on the second verse as he lets her know that her feelings are reciprocated in the best way possible. The two show off their impeccable senses of harmony throughout the track, doing some impressive vocal tricks in such deceptively simple ways that you'll be rewinding it back to figure out how they pulled it off. They then have the nerve to do it again in a video performance taped for tonight's The Late Show With Stephen Colbert for his ongoing #PlayAtHome series.

We doubt that Jacob Collier or Tori Kelly will have to worry about us running out of love for them anytime soon. We will, however, be running out to buy our copies of Djesse Vol. 3 when it arrives in stores on August 14th. Because we love you, you can check out both the studio version of "Running Outta Love" and get a sneak peek of tonight's magical performance on The Late Show (even though his clones sit this go 'round out) when you stick around.


TAGS:  audio, Jacob Collier, tori kelly
Previous: B. Golden, Conya Doss & Sunny Jones Share The Struggle And The Beauty Of Our ‘Skin’ Next: Melba Moore Is Living Her Best Life In ‘Just Doing Me’