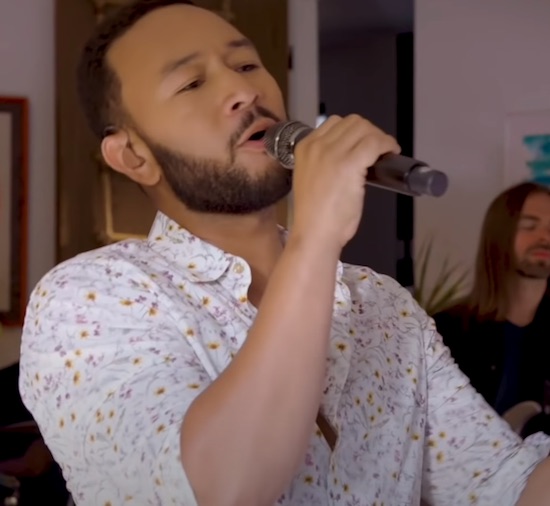 When 2020 began, John Legend had big plans for the release of his new album, Bigger Love, and hitting the road on a massive world tour to support it. Unfortunately, a certain global pandemic derailed the latter, but he did drop Bigger Love in June and fans have been bopping to it ever since. With a new album to promote, Legend's show must go on even in the midst of all this madness, so he has brought us a Tiny Desk (Home) Concert in conjunction with NPR Music for the latest stop on his promo train.

Legend switched things up a bit from past Tiny Desk (Home) Concerts and went all-out for his edition, deciding to fly in his whole band from Philadelphia and to record in an office space in Los Angeles to give us Tiny Desk realness. For the most part, John and his four-piece band and three background singers practiced social distancing while getting soulful for the camera with their first song "Ooh Laa." John stood in front of his trusty grand piano for this "doo-wop meets trap" number and gave us a little show with a side-to-side sway and arm in the air. All that movement must have worn John out because he pulled up a barstool and had a seat to sing his next song "Wild," where he delivered an impassioned vocal performance.

John Legend didn't stop emoting there. He finally sat down at the piano to perform the single "Conversations In The Dark" and wrung every bit of emotion from the song. His background singers sounded like a full gospel choir at one point with their soaring harmonies. Even John had to step back and admire that performance, saying, "I felt that, I felt that," once it was over. After a brief intro to his final song, Legend and company wrapped things up with his new album's upbeat title track. Perched once again on the stool, John chair danced to the song's tropical sway as he sang his heart out.

John Legend's Tiny Desk (Home) Concert may have only been four songs and 15 minutes long, but it felt like a whole concert from the EGOT. Since this is the closest we'll get to seeing him live anytime soon, we'll take it.


TAGS:  john legend
Previous: Toni Braxton Is Ready To Two-Step Her Cares Away In ‘Dance’ Next: Ryan Destiny Is Just Fine Doing Her On ‘Do You’