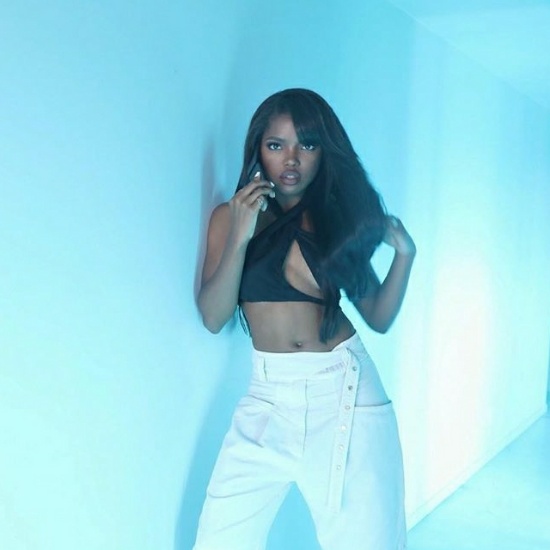 Singer/actress Ryan Destiny is wasting no time and not letting Rona get in her way. Just last week, she dropped her jam "Do You" and had us nodding to the moody kiss-off. Now she's back again despite these pandemic times (and the necessary quarantine) to give us a sexy video for the track in which her solo star shines.

It's quite obvious from the moment the clip begins that Ryan is giving us Aaliyah vibes. She's got the long hair with the sideswept bang, the baggy pants and the midriff-baring halter. She even dons a pair of shades at one point to make the look complete. But it's not just Aaliyah she's channeling in the clip. The entire production feels like it was pulled from the '90s thanks to the retro computer-themed graphics, the video's cool blue tones and the slightly grainy video quality. Ryan is riding solo in the entire clip as she poses it up in a beachfront abode and makes eyes at the camera like it's the no-good man who she's telling off.

It's an effective video that gives us everything we need and shows that Ryan Destiny might just be cut for this music star life. Check her out doing her thing on the solo tip when you press play below.


TAGS:  aaliyah, Ryan Destiny
Previous: PJ Morton, Darrel ‘MusiqCity’ Walls & Zacardi Cortez Take Gospel To The Dancehall With ‘So In Love’ Next: Snoh Aalegra Takes On Usher’s ‘U Remind Me’ For ‘When Sounds Collide’