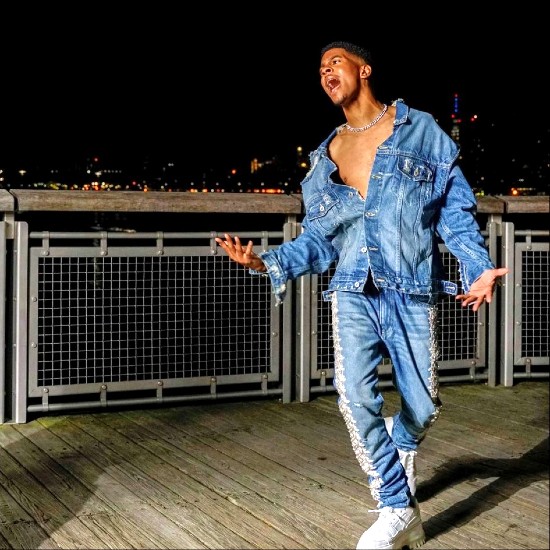 As he continues on the high from the release of his Blue EP last month, actor and singer Brett Gray gives fans what they want with his latest video for the single "Baby Blue." Best known from his role as Jamal Turner on the Netflix series On My Block, the “Baby Blue” visual shows a charming yet playful side of the Philadelphia native. Against the backdrop of the New York City skyline, Gray is surrounded by a trio of fierce, freestyle dancers as he sings about a love that leaves him with more questions than answers. It seems he’s reached the point of offering his lover an ultimatum and the liberation of such a declaration is on full display in this vibrant capture.

As if the “Baby Blue” video didn’t serve Gray’s adoring following with enough eye candy, he recently joined ELLE for a round of their popular game "Song Association." The featured celebrities are given 15 words and 10 seconds each to sing a song containing that word in its title. Music buffs of a certain age will be impressed with the breadth of the young jawn’s mental music library. Though he stumbled through some of the lyrics, he was able to pull from the works of a wide variety of artists, such as Selena, Nina Simone, Tevin Campbell and Tom Petty, in order to beat the buzzer and ace the game with a perfect score.

Watch Brett Gray’s “Baby Blue” video, and then play along with his round of "Song Association." If you haven’t already done so, be sure to add his Blue EP to your collection from your preferred digital platform.


TAGS:  brett gray
Previous: Anthony Ramos & Ari Lennox Show The Importance Of Nightlife In ‘If You Want Me To Stay’ Next: Mack Wilds & Salaam Remi Take Us On A ‘Home Vacation’