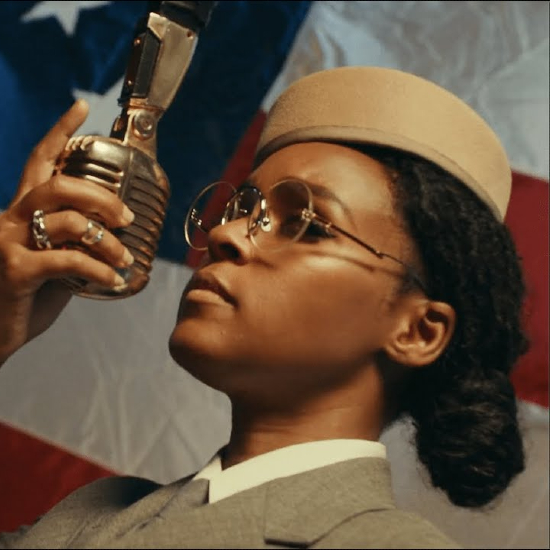 Janelle Monáe and her Wondaland clique have been vocal activists and longtime supporters of the Black Lives Matter movement, putting on free shows to support the cause and releasing the posse cut “Hell You Talmbout” back in 2015. Now she’s giving us an earful and an eyeful with her new single “Turntables” and its accompanying visual. The track was written for the documentary All In: The Fight for Democracy, an Amazon Original documenting the history of voter suppression. Janelle told Entertainment Weekly, “I hope this song can inspire those who are on the ground doing the work.” Monáe shared a teaser for the video shortly after releasing the track, and now we get to see her emotion picture in all its glory.

While this emotion picture isn’t as long as the one created for her album, Dirty Computer, it is no less dense with emotion and meaning. Directed by Child, there are many messages layered throughout the short clip that beg you to watch it over and over again.

The video starts with an unassuming Black nuclear family. But then you notice differences: the wife is the one at the table reading the newspaper and the husband is the one in the kitchen frying chicken. Meanwhile, their son is the one on his phone and the daughter is lost in front of the TV playing a virtual reality game, a subtle reference to girls taking an interest in STEM.

Throughout the clip, we see Janelle dressed like an old school Civil rights leader in a suit, trenchcoat and military cap. She’s seen with the family at the dinner table, walking on the beach retrieving an artifact from the sea and giving her own testimony against a few different studio backdrops.

Like many other videos released in support of the Black Lives Matter movement, the clip features archival footage of speeches, protests and cultural figures. Janelle also makes a special effort to showcase sheroes like Angela Davis, Jillian Mercado, Alexandra Ocasio-Cortez, Sista Souljah, Stacy Abrams, Auntie Maxine Waters and other women of the movement.

The striking visual ends with us finally seeing what our favorite android was pulling from the ocean. We won't give it away, but press play on Janelle Monáe's "Turntables" emotion picture to see her vision for yourself.