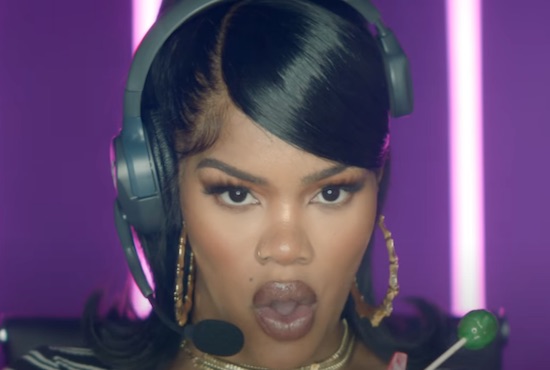 Teyana Taylor is currently basking in the glow of new motherhood. But before giving birth, she made pretty good use of her time by filming a gang of videos from her recent project The Album, including the revolutionary recent entry "Still." While she and her hubby Iman Shumpert wait to get the doctor's orders to get it on, Teyana releases her sexiest video from the set with a steamy clip for "1-800-One-Night."

As per usual, Teyana takes the directorial helm and looks to the '90s for inspiration. She fittingly goes the Girl 6 route and plays the role of a phone sex operator. However, she takes things to a more ghetto-fabulous level with a few friends as they make men's fantasies come true (while also using products from Teyana's makeup line). Teyana actually shows up around the video's midway point as the song's slow and slinky synth begins to pour from the speakers. Sadly, the video bliss is over almost as soon as it begins. But before everything fades to black, Teyana shows us the behind the scenes of those sexy 1-800 ads as all the ladies break character and go about their own business soon after they cut.

If there's anything we know about Teyana Taylor, it's that her grind never stops. So we expect that this won't be the last video we're getting from The Album by a long shot. Check it out when you press play.


TAGS:  Iman Shumpert, teyana taylor
Previous: Masego Prepares To Take Us On His Next Journey With His ‘Passport’ Next: Loren Oden Drops Debut Album ‘My Heart, My Love’ Presented By Adrian Younge