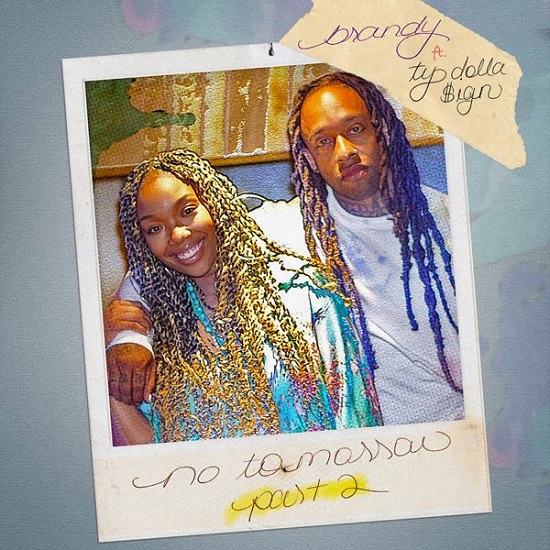 The resurgence of Brandy has been interesting to watch. It's found the veteran artist still crossing off many milestones and taking control of her artistry and her image in a way she never has before. Her album B7 has some of the best songs of her career, including fan favorite "No Tomorrow." Now, to broaden the song's appeal, Brandy has enlisted the help of feature king Ty Dolla $ign for the song's remix, "No Tomorrow, Pt. 2."

Not much changes on this new take. The same spare arrangement of piano and snaps still anchors the track as she sings of how deeply in love she is, with her singing on the chorus, "I'm gonna blow your phone up / In case there is no tomorrow / And I won't let you go / Like there's no tomorrow." Ty adds a bit more edge to the proceedings, with him proclaiming, "Now wait a minute my lady / Somebody here gonna be having my babies." From there he kicks his own verse and changes around some lyrics on the chorus to make things fit his aesthetic. His most important contribution here, though, is his additional harmonies, which meld with Brandy's to add more texture to the sparse arrangement.

To make sure the new version got even more attention, Brandy took to the Billboard Music Awards stage for the first time ever (we don't know how that's even possible) to perform a medley of B7 tracks and an old classic. After a rather dramatic rendition of "Borderline," Ty joined Brandy for a moment as they sat down for the duet. Once that was done, she trotted out oldie-but-goodie "Almost Doesn't Count" for a show-stopping finale that showed why she's still standing more than 25 years after making her debut.

Check out the studio version of "No Tomorrow, Part 2" when you press play below. Then stick around to watch Brandy and Ty Dolla $ign wow at the BBMAs.