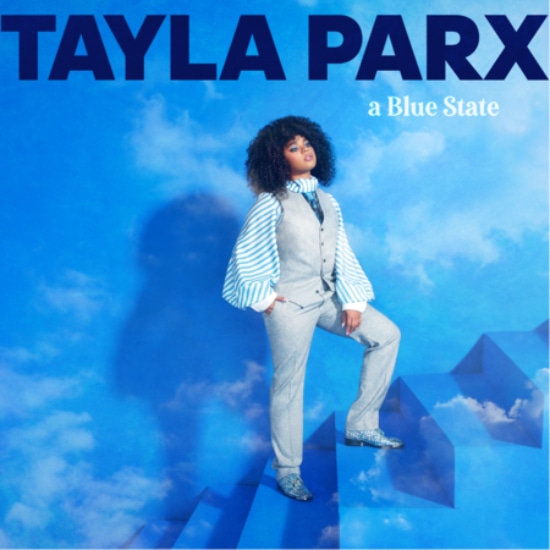 Tayla Parx spent the better part of the last decade penning hits for artists like Ariana Grande, Janelle Monáe, Panic! At The Disco and The Internet. But her 2019 debut album We Need To Talk proved that the GRAMMY-nominated singer-songwriter saved some of her best work for herself. Tayla's sophomore release, Coping Mechanisms, is set to drop next month. But before she unveils the new-new, she dips into the past with her cover compilation EP A Blue State.

Tayla's handpicked trio of songs pays homage to Marvin Gaye, Lauryn Hill and Kirk Franklin. For someone who normally flexes her songwriting skills, it's lovely to hear her interpretation of someone else's words. "Before my album, I wanted to surprise you guys with a collection of songs that I’ve not only cried to but been inspired by," Ms. Parx explains. "They’ve brought me an abundance of light in such a dark time. I hope to bring that same light to the people I care most about, my Taylatots. This one’s for you."

Her selection of "What's Going On" proves timely and relevant, while her approach keeps it from feeling like another stale retread. Parx incorporates layered harmonies and beat drops for a modern sound while maintaining the spirit of the original. A funky new bassline and airy pop vocals transform Hill’s “Everything Is Everything” into a bubbly dance tune that ends way too abruptly. In contrast, she slows the tempo on "I Smile," giving it the feel of a Pop&B ballad with a motivational lilt.

A Blue State is currently available for download via major retailers. Preview below and stay tuned for the release of Coping Mechanisms on November 20th. The album's lead single "Dance Alone" became one of summer's biggest hits – earning a feature on Michelle Obama’s #BlackGirlMagic-filled playlist on Spotify, plus giving fans a chance to strut their stuff in a special #DanceFromHome edit of the visuals. Scroll down to watch Tayla slay vocals and moves in her recent live performance of the song.