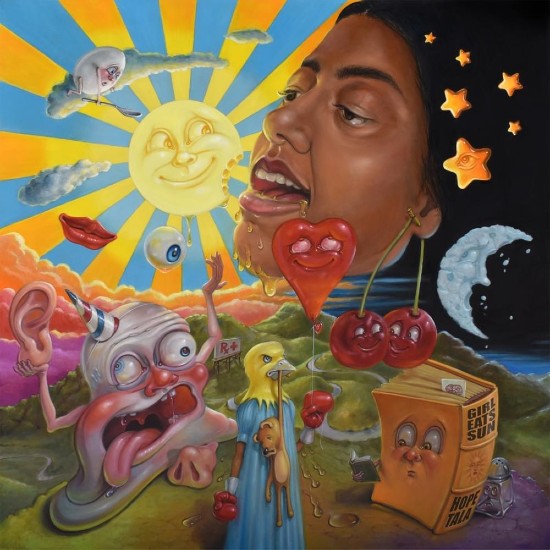 At a time when it can be a bit difficult to distinguish one young songstress from another, London-born newcomer Hope Tala has managed to carve out a space of her own. Her signature blend of R&B and bossa nova serves a refreshing twist on the status quo, and we are here for it. Following the release of her 2018 EP Starry Ache and then her Sensitive Soul project, which dropped during the summer of last year, Hope has remained in heavy rotation across the UK and beyond. Though she covers a range of dramatic and emotional subject matter, her latest EP Girl Eats Sun provides a much-needed boost to an otherwise downright dreadful year.

At just 20 minutes, what the project lacks in duration it more than makes up for in impact. The previously released singles "All My Girls Like To Fight" and “Crazy” helped to propel the frenzy and anticipation of the new EP, which does not disappoint.

In addition to providing listeners with a few rhythmic reasons to dance, Hope’s approach to creating the EP also serves as a powerful reminder of our strength and to never allow ourselves to be paralyzed by fear. She says, “At the core of Girl Eats Sun is an assertion of confidence and boldness. The title is a paraphrase of ‘if you can’t take the heat, get out of the kitchen’ – as the girl eating the sun I’m daring and fearless. I chose this title because I feel as if the songs and stories on this project are more vivid and inventive than anything I’ve released thus far, and I’ve pushed my sound in different, exciting directions.”

Hope capitalizes on Girl Eats Sun's momentum with the release of the music video for one of the project’s standout tracks, “Cherries” featuring Aminé. The Anna Fearon-directed visual depicts a Renaissance theme, incorporating Hope’s love of Shakespeare with a few more modern twists. The song itself, noted as her favorite lyrically, showcases her use of complex metaphors to describe emotions. She explains, “Since I started writing music, I’ve used fruit imagery; I’ve always been inspired by the Garden of Eden and the story of Adam and Eve. I think of ‘Cherries’ as being a really corporeal song –  there’s a lot of lyrical content about how the body portrays feeling and emotion, and when I was writing it I used the symbol of cherries as my focal point to help me understand where these two worlds – material and emotional – collide.”

Sink your teeth into Hope Tala’s Girl Eats Sun EP, and feast your eyes on her "Cherries" visual for an added treat.