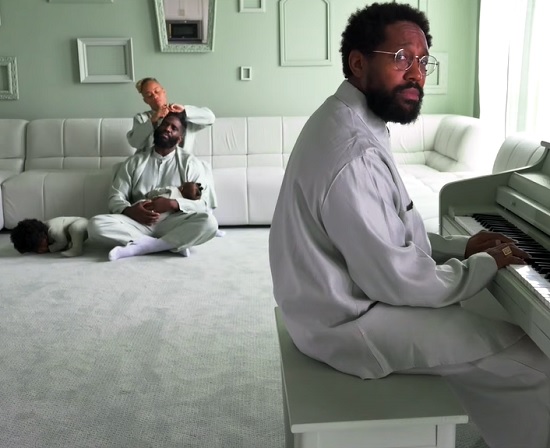 Earlier this year, we were treated to the revolutionary sounds of EMPIRE's compilation Voices For Change, Vol. 1. The compilation brought together some of our favorite artists who spoke out about the injustices currently faced by Black people in the US. A standout from the set was PJ Morton's chastisement directed at ignorant racists entitled "You Should Be Ashamed." Now PJ has linked up with Houston rapper on the rise Tobe Nwigwe for a revamped version of the track, simply renamed "Ashamed," for the song's video.

The video, also directed by Tobe, finds PJ borrowing a bit of his style. He sits in a pale mint green room at a piano of the same shade (while wearing loose, flow-y clothing of — you guessed it — the same shade) as he plays the song's chords. The lyrics, which admonish those who refuse to see Blacks and others as people worthy of equal respect and opportunity, are brought to life with PJ's simple performance. Another layer is added as Tobe takes over for the second verse. He sits on the floor holding his children as his wife, Fat, twists his hair. It's such an ordinary scene, but it speaks volumes on just how ordinary yet revolutionary the Black experience is. Rather than rap, Tobe sings as he reminds us that the current strife is the same old song we've been hearing for centuries now.

"Ashamed" is a song that we should all take to heart, especially as the threat of increased strife looms as we await the results of an extremely polarizing election. Hopefully, it will be able to help us heal some of these collective wounds.