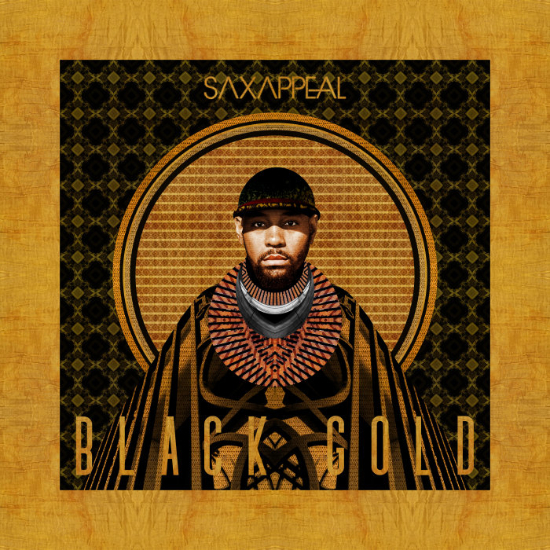 LaDarrel Johnson has been playing the saxophone since he was child, so it's not an exaggeration to say that the instrument is an extension of himself. Professionally known as Saxappeal, the GRAMMY-nominated musician/producer is highly sought-after for his skills on stage and in studio. Before the pandemic, his busy schedule included touring with legends like Charlie Wilson. But quarantine allowed him the chance to direct all of his energies towards his new solo album Black Gold, and it's literally music to our ears.

The album fuses jazz, soul, hip hop, funk, R&B and spoken word into a groovy amalgam that deserves a permanent spot in your music rotation. Although we were privileged to receive an exclusive first listen over the summer with "The Song That's Called...," we weren't prepared for the straight heat that Saxappeal brings on this 15-track collection. Perhaps that's why he titled the opening track "Don't Be Alarmed." Backed by horns and laced with beats, the song is a vibe that sets the tone for the remainder of the album. In fact, Black Gold is an entire mood.

Mr. Johnson is a man on a mission, transforming his saxophone into an unstoppable force of nature. There's no escaping the sheer force and brilliance on tracks like "Swazi Tribe Vibes," "I.P.T.," the aforementioned "The Song That's Called..." and "Red Cup, Turn Up." Tribute songs "For Mack" and "Mamba Mentality (Homeboy)" are quite remarkable, not just because you feel Saxappeal's heart and soul through his playing, but also because of the men that they honor. Far from a somber affair, both tracks stand out in a sea of spectacular compositions.

Saxappeal doesn't keep all the shine for himself, though. He recruits a few talented friends to help manifest different aspects of his creative vision. SoulBounce fam Kenny Wesley gets slinky with his effortless vocals on the funky jam "Dance The Night Away," which also features LG. Mike Ellison captivates with his spoken word on the seductive track "These Hands." Jazz violinist Evan Garr elevates "Sax's Juke Joint" and helps create an unforgettable backdrop for some magnetic bars from Dean Beanz. Meanwhile, Bashiri Asad's neo-soul sound links up with KetchPhraze's lyrical flow on "The Vibe Is Right." Rapper Fatt Father steps up to show the brothas some love on "Black Boy Joy," which closes with a heartwarming father/son affirmation.

Black Gold is extremely enjoyable from start to finish. The album closes with "She's As Beautiful As The Sunrise," a track that recently received visual treatment by Lamar Landers. While the title evokes feelings of romance, the video is a love letter to Sax's hometown of Detroit. Preview the album below, purchase a copy for your collection, then scroll down to view the new video. Sax also has merch to support the album, like shirts and hoodies with empowering phrases like "ERACISIM," "Kings Uplift Queens" and "Queens Uplift Kings." Visit his website for a full selection of items.