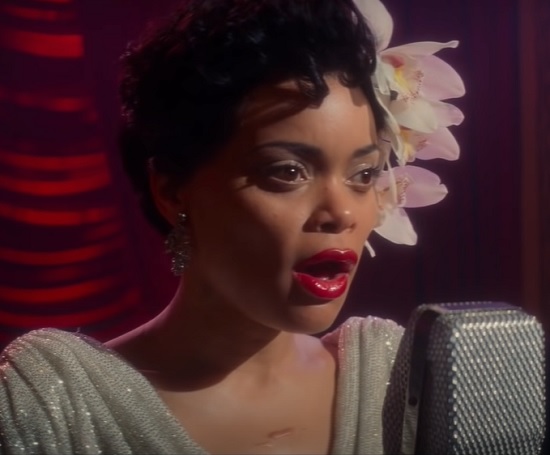 Jazz singer Billie Holiday had the kind of talent and personality that was larger than life. That's why her story and music endure more than 60 years after her tragic death. But while we may think that we know her story thanks to biographies and films like Lady Sings The Blues, there are chapters that have yet to be explored. Helping to tell part of her story that many may not know, singer Andra Day steps into her shoes in the upcoming movie The United States vs. Billie Holiday.

The film, which marks the songstress' acting debut, chronicles the life and times of Lady Day while focusing specifically on the turbulent time that the Federal Bureau of Narcotics targeted the singer. In the film's trailer, we see Andra embody the embattled singer as she fights for artistic freedom and her life while dealing with addiction and racism. The singer embodies the personality of Billie alongside her costars (including Tyler James Williams and Trevante Rhodes) and delivers what looks to be an uncanny performance.

In addition to the film's trailer, "All Of Me," the lead single for the soundtrack, has also been released. It finds Andra channeling the spirit of Billie Holiday with a recreation of the jazz standard that Billie popularized way back in 1941. Producer Salaam Remi helps recreate the unmistakable sound of the era with beautifully arranged piano, strings and horns. Andra, meanwhile, recreates the silky-smooth vocal with just a hint of rasp that Lady Day was known for. Still, there's a bit of Andra in the mix as well, giving the whole jazzy affair a brightness that resonates.

We cannot wait to watch Andra Day transform into the legendary singer in The United States vs. Billie Holiday when it arrives on Hulu on February 26th. Until then, you can watch the trailer for the film and listen to Andra's cover of "All Of Me" below.